I’m sharing my good friend Beena’s Masala Chai Recipe. What I love about this recipe is that it can be adapted for the seasons, or to what you have in your spice cabinet. Traditional Masala Chai is made with full-fat milk, sugar and spices. Here is a version that is free of refined sugar, and made with a dairy-free alternative. 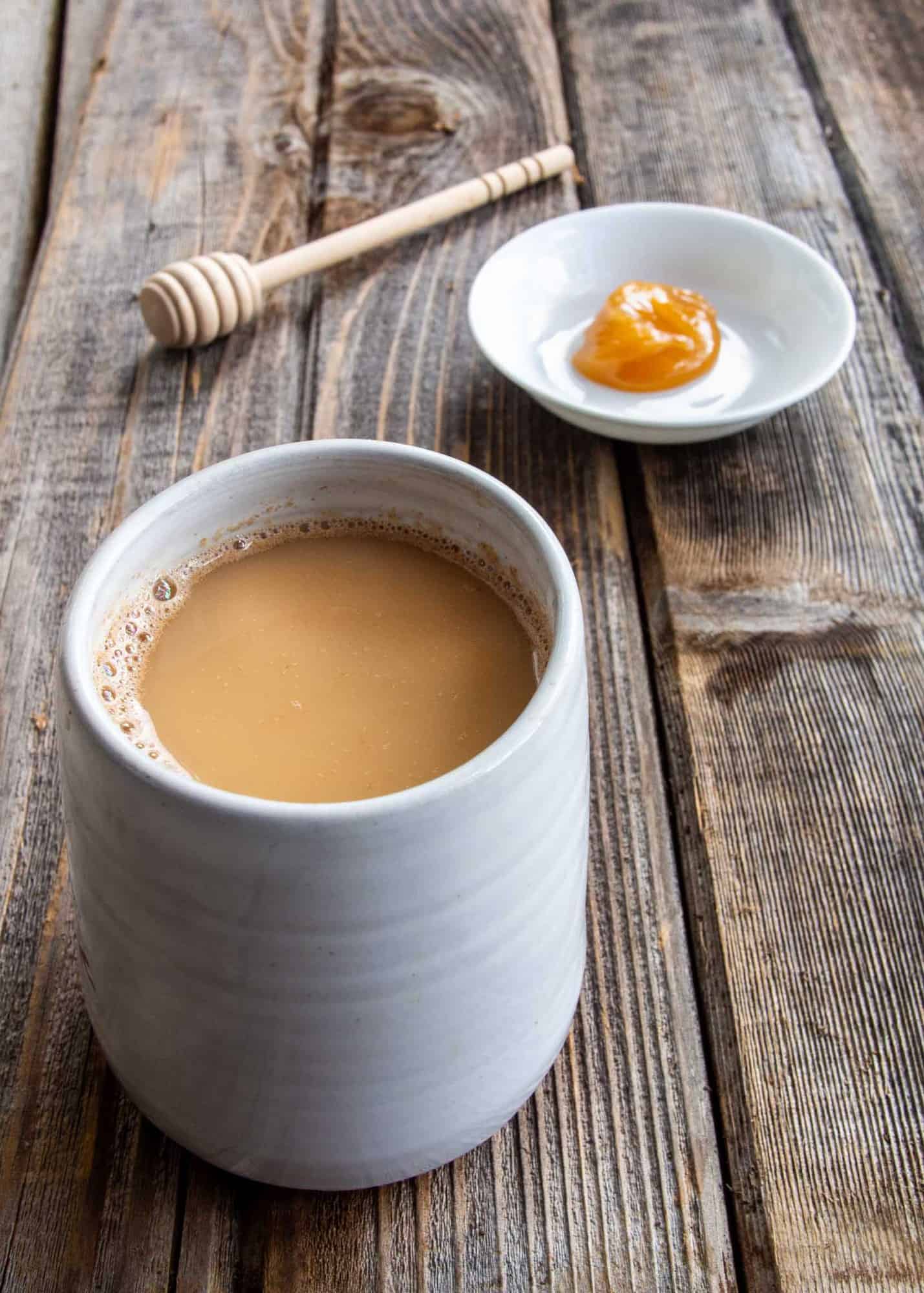 Masala chai translates to ‘spice’ ‘tea’. This recipe, or un-recipe, is more of a guide on how to make your own spiced tea at home. My good friend Beena makes delicious masala chai, and when I asked her for the recipe, what she shared was more of a guide. I love ‘un-recipes’ as they allow for the freedom to use what you have at home, and the option to add ingredients that follow the seasons.

Traditional masala chai often contains a lot of sugar. Beena doesn’t add any sugar to hers and enjoys the spiced black tea as it is. I love adding a little bit of honey to mine for a natural sweetener; maple syrup would work as well for those looking for a vegan version.

We often overlook spices as a source of beneficial nutritional compounds. Spices are a source of phytochemicals, which are healthful plant chemicals. Phytochemicals can act as antioxidants, neutralizing free radicals and removing their power to create damage. I’ve shared more on antioxidants here – What Are Antioxidants Good For.

Several clinical trials have found cinnamon to have positive results for blood sugar-lowering in type 2 diabetics. Overall it appears that taking cassia cinnamon (note studies were not referring to Saigon cinnamon or Ceylon cinnamon) at doses of 120 milligrams to 6 grams daily for 4 to 18 weeks can significantly reduce fasting blood sugar levels (1,2,3,4). For reference, 2 teaspoons of cinnamon is about 5 1/2 grams. 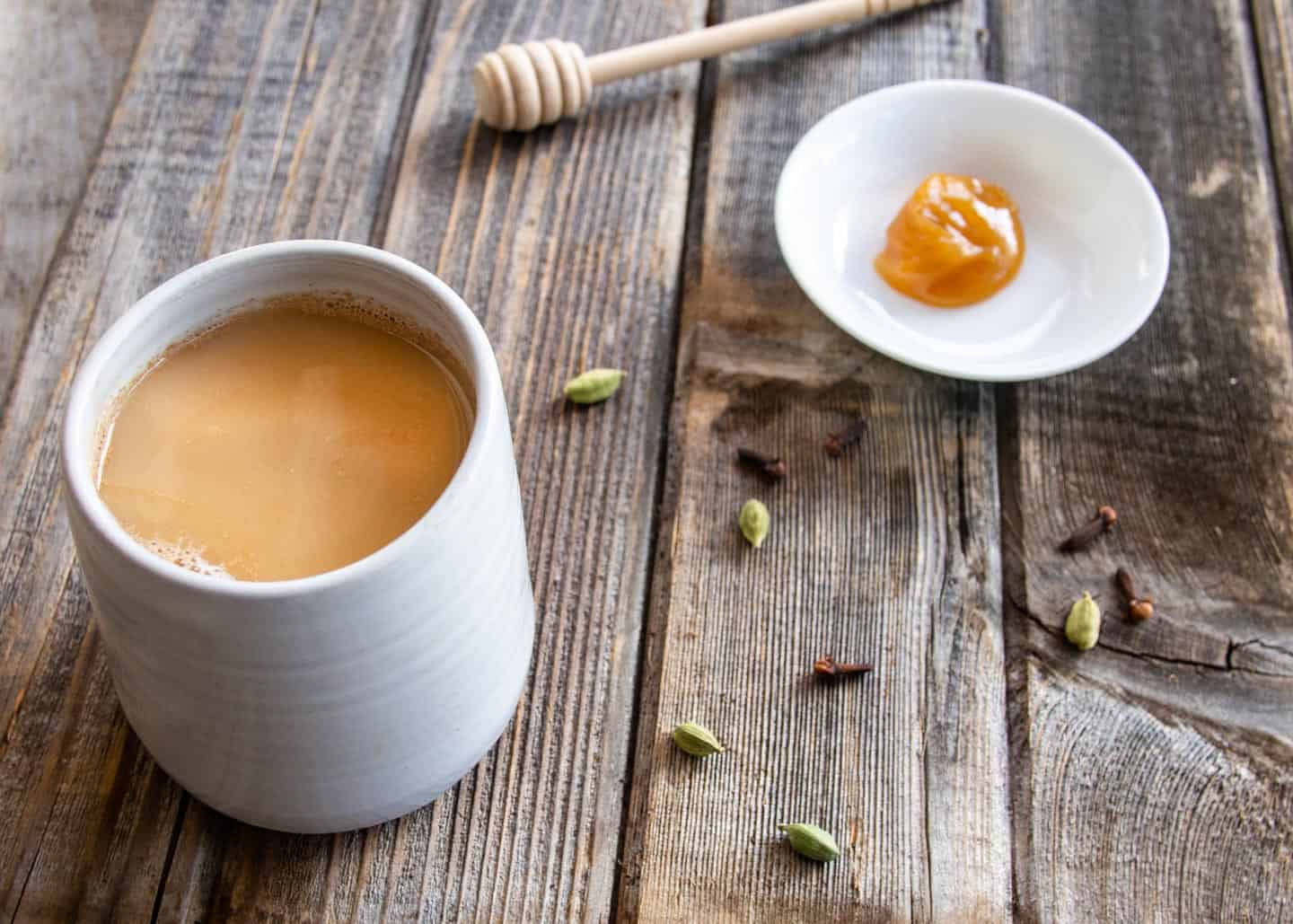 Choosing a Milk or Milk Alternative

Traditional chai is made with full-fat milk, producing a creamy and fuller-bodied masala chai. If you are looking for a dairy-free alternative, choose a milk alternative that has a higher fat content such as organic soy milk, pea milk or a homemade hemp milk (see Hemp Milk Nutrition & Hemp Milk Recipe. For more information on milk alternatives see Which Is The Best Milk Alternative For You. 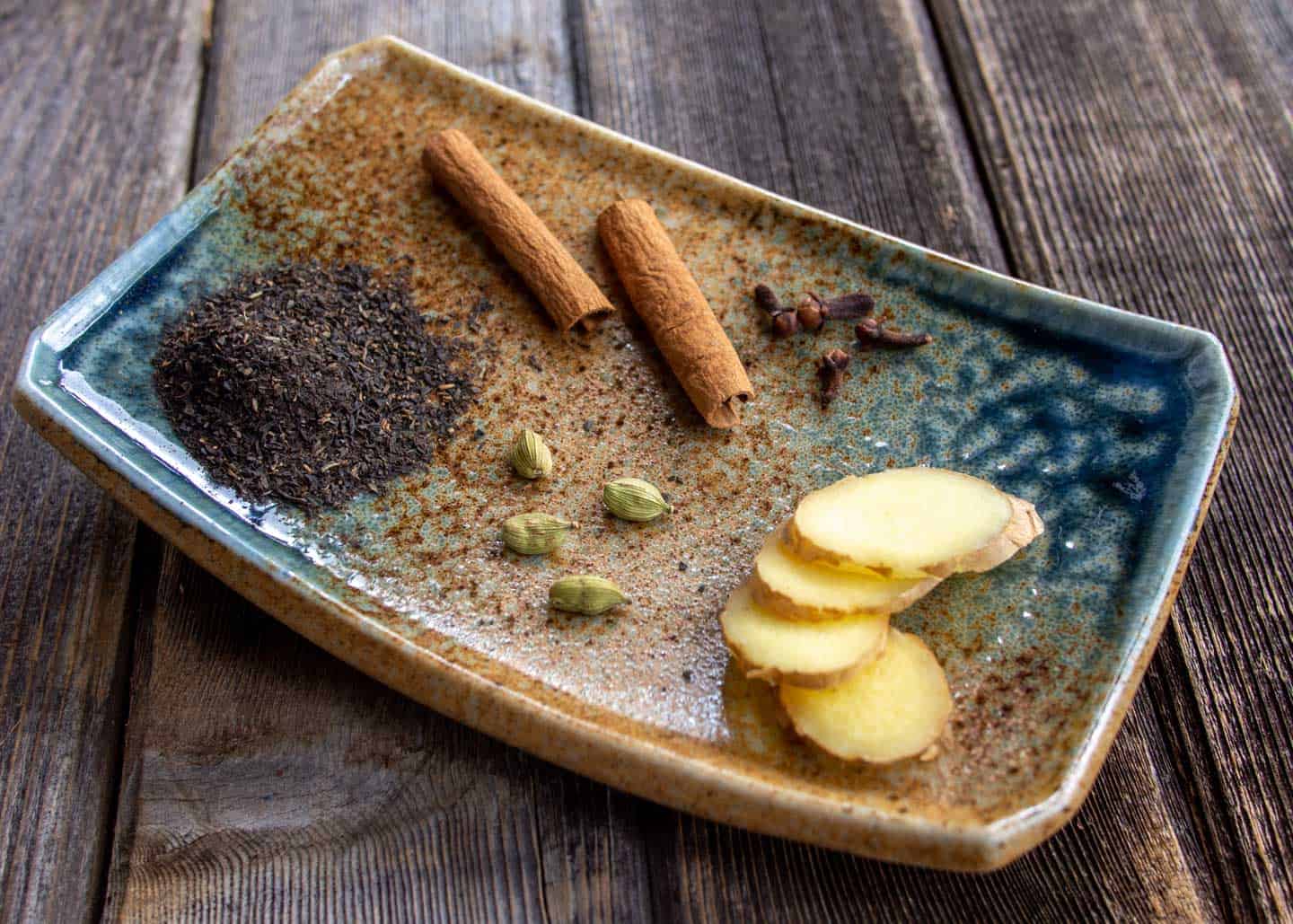 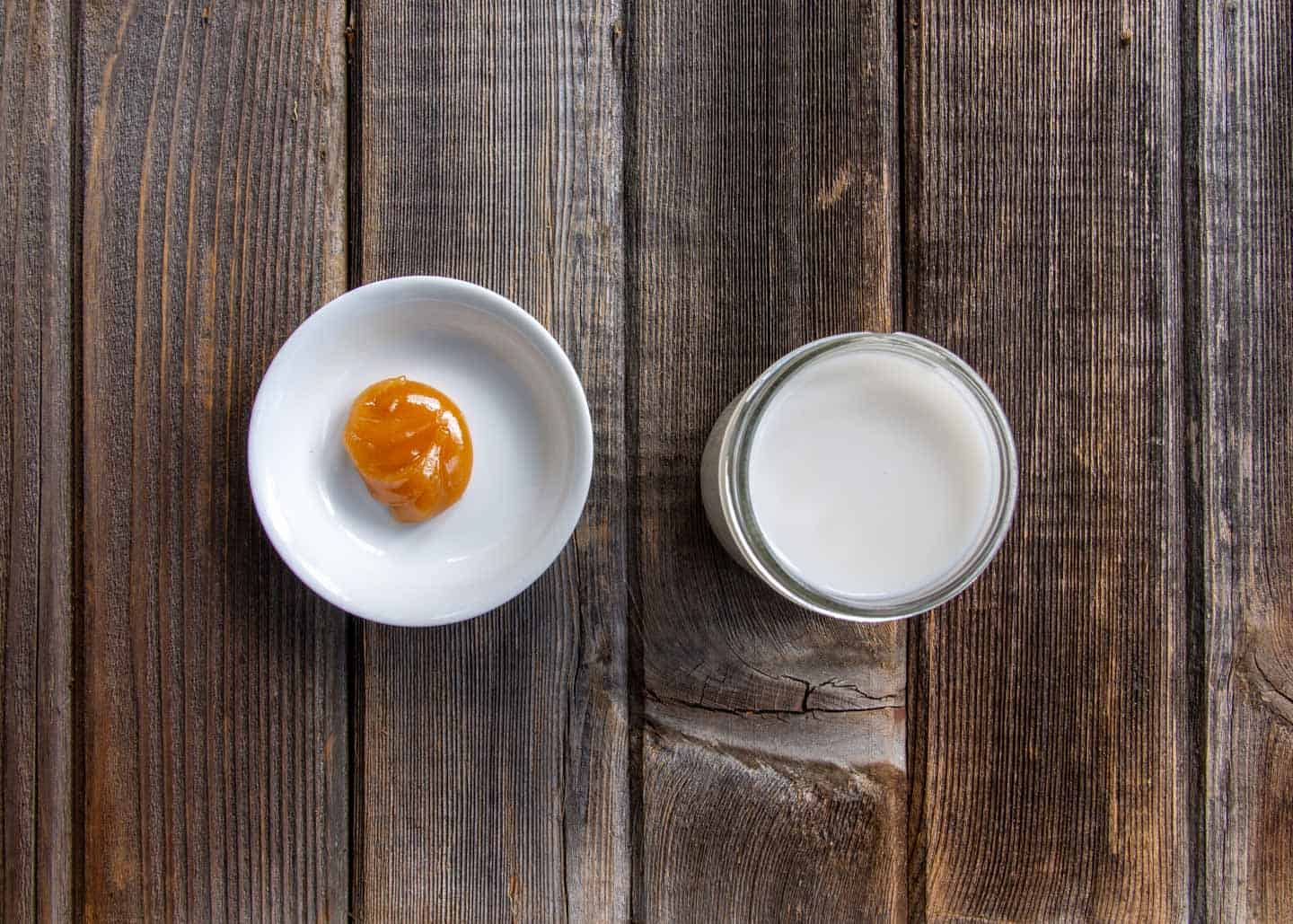 This recipe for masala chai uses my favourite ingredients:

Other additions may include:

You can make a vegan masala chai by choosing a non-dairy milk alternative, and sweetening the chai with maple syrup instead of honey.

Simply omit the black tea for a caffeine-free masala chai. Don’t skip the sitting time though, the longer the spices sit in warmed milk the more flavourful the drink will be. Decaffeinated black tea is also available and can be used to offer a more authentic masala chai flavour.

If you don’t have whole spices at home, you can use the powdered version. Try using 2 teaspoons of ground cinnamon, 1 teaspoon each of ground ginger and cardamom, and 1/2 teaspoon of ground cloves. Gently heat in warmed milk and water, and turn off the heat to let the spices infuse the liquid before adding the tea. 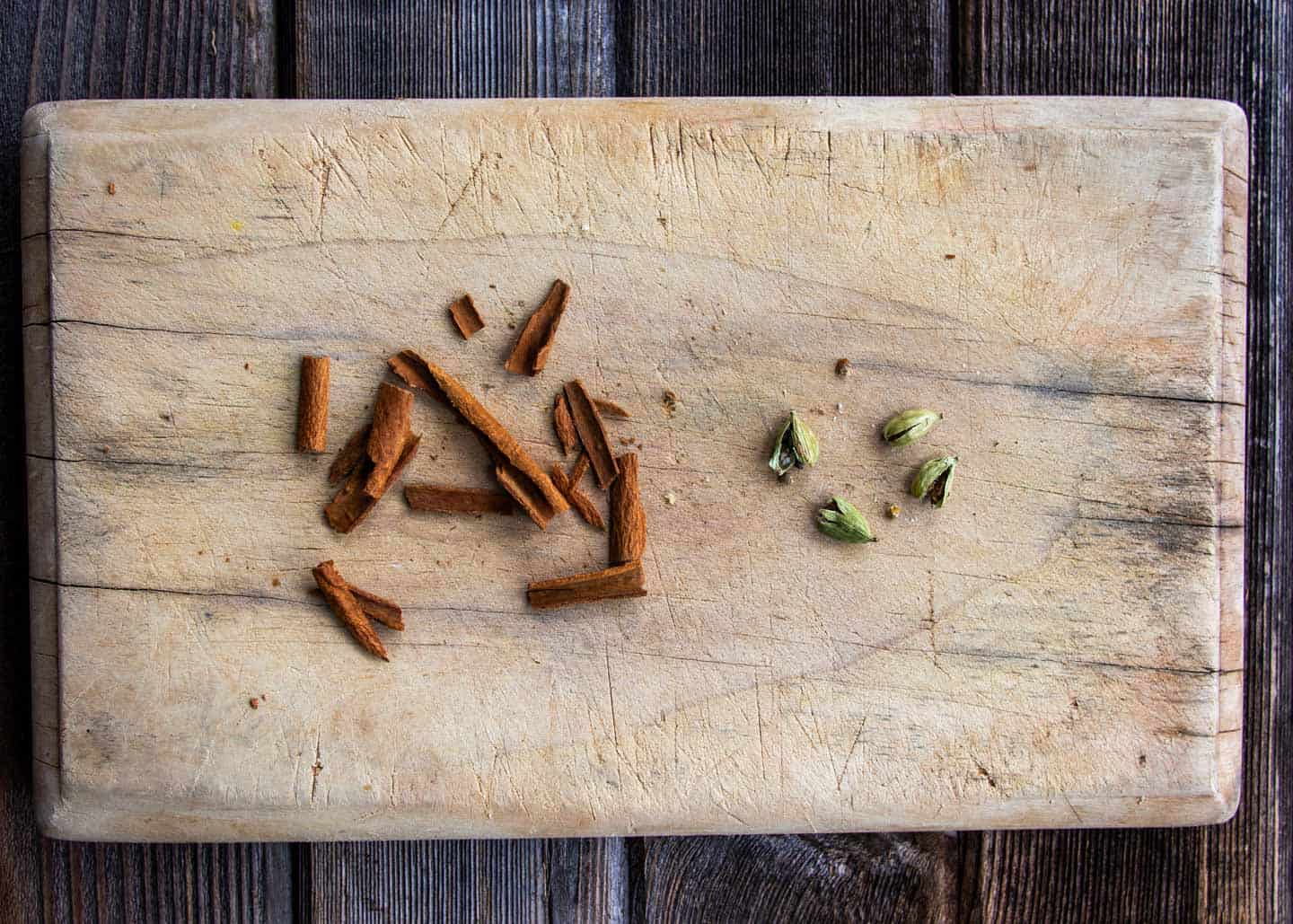 Smash cinnamon and cardamom on a cutting board with the flat side of a kitchen knife. 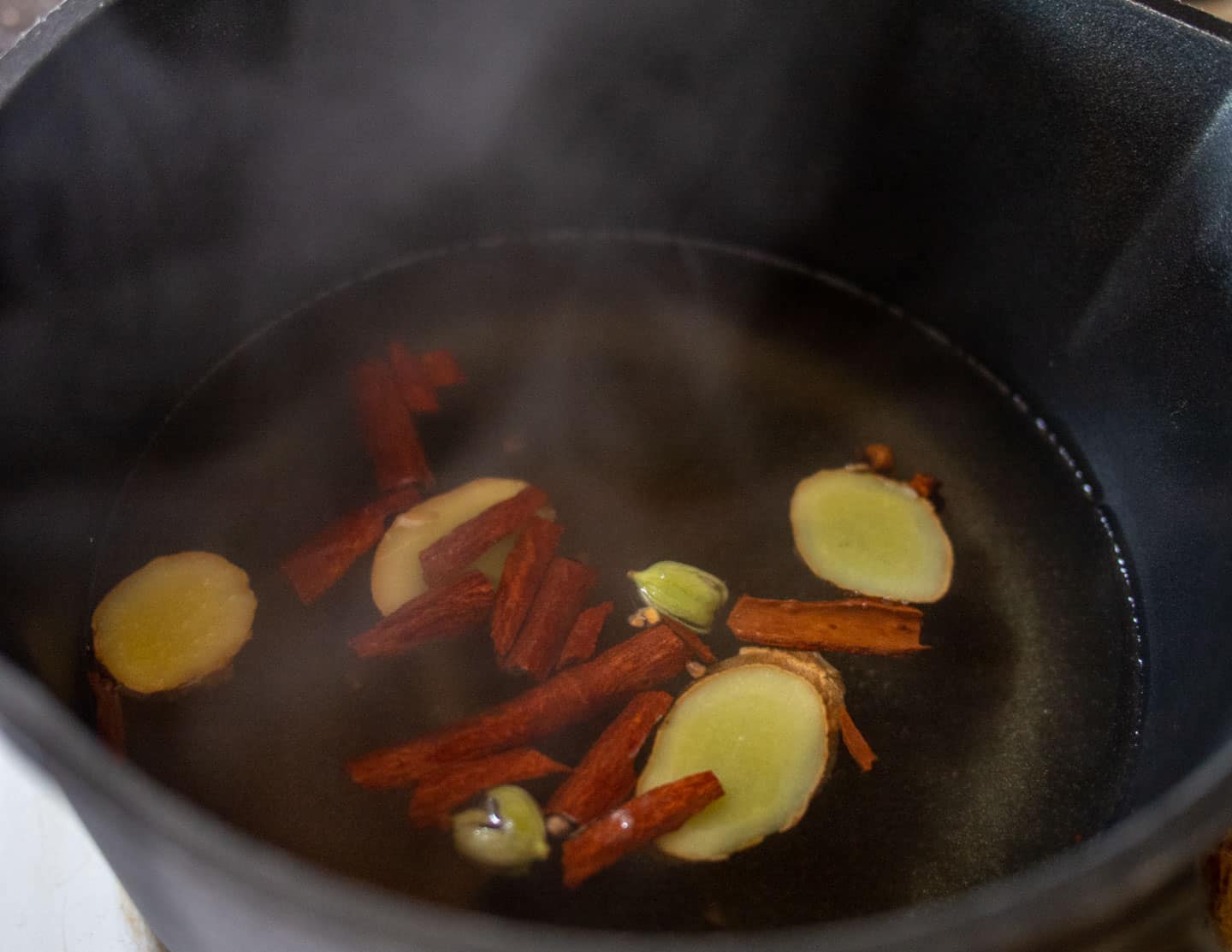 Add smashed spices to 2 cups of water and bring to a boil, and let boil for about 3 minutes. 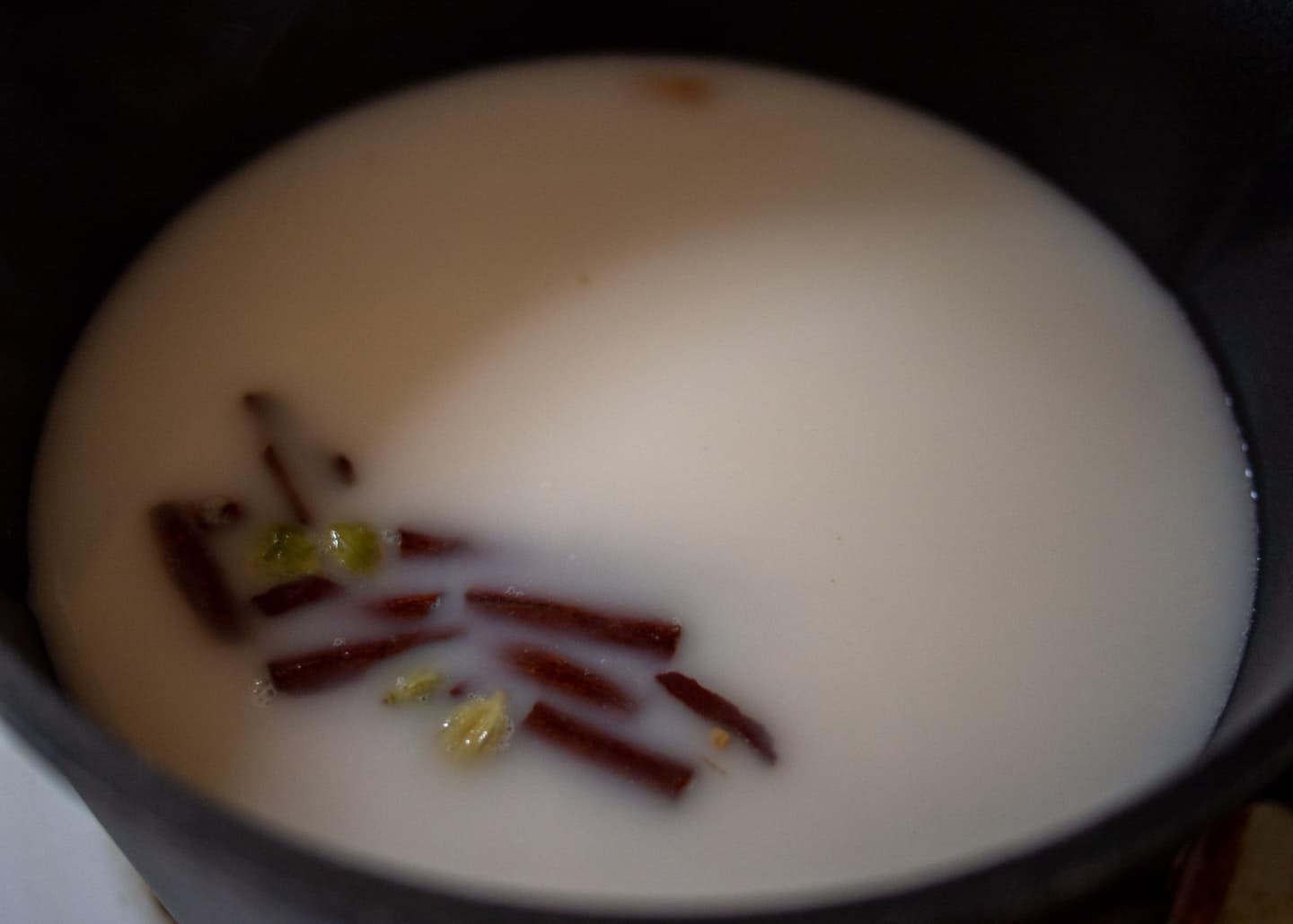 Add milk to the saucepan and gently heat. 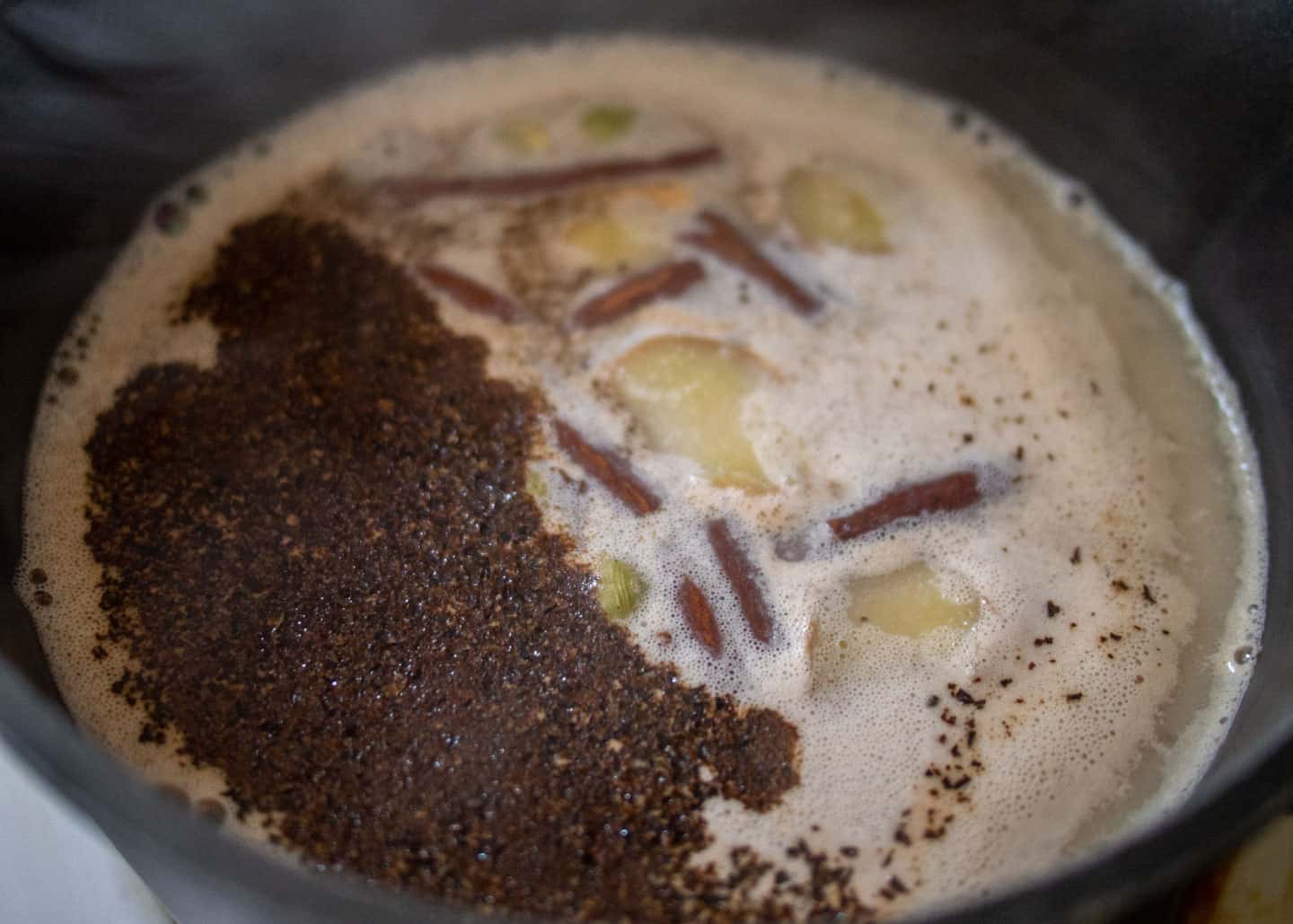 Once milk and spices have been heated, turn off the heat and add the black tea. Cover and let sit for 3 minutes. 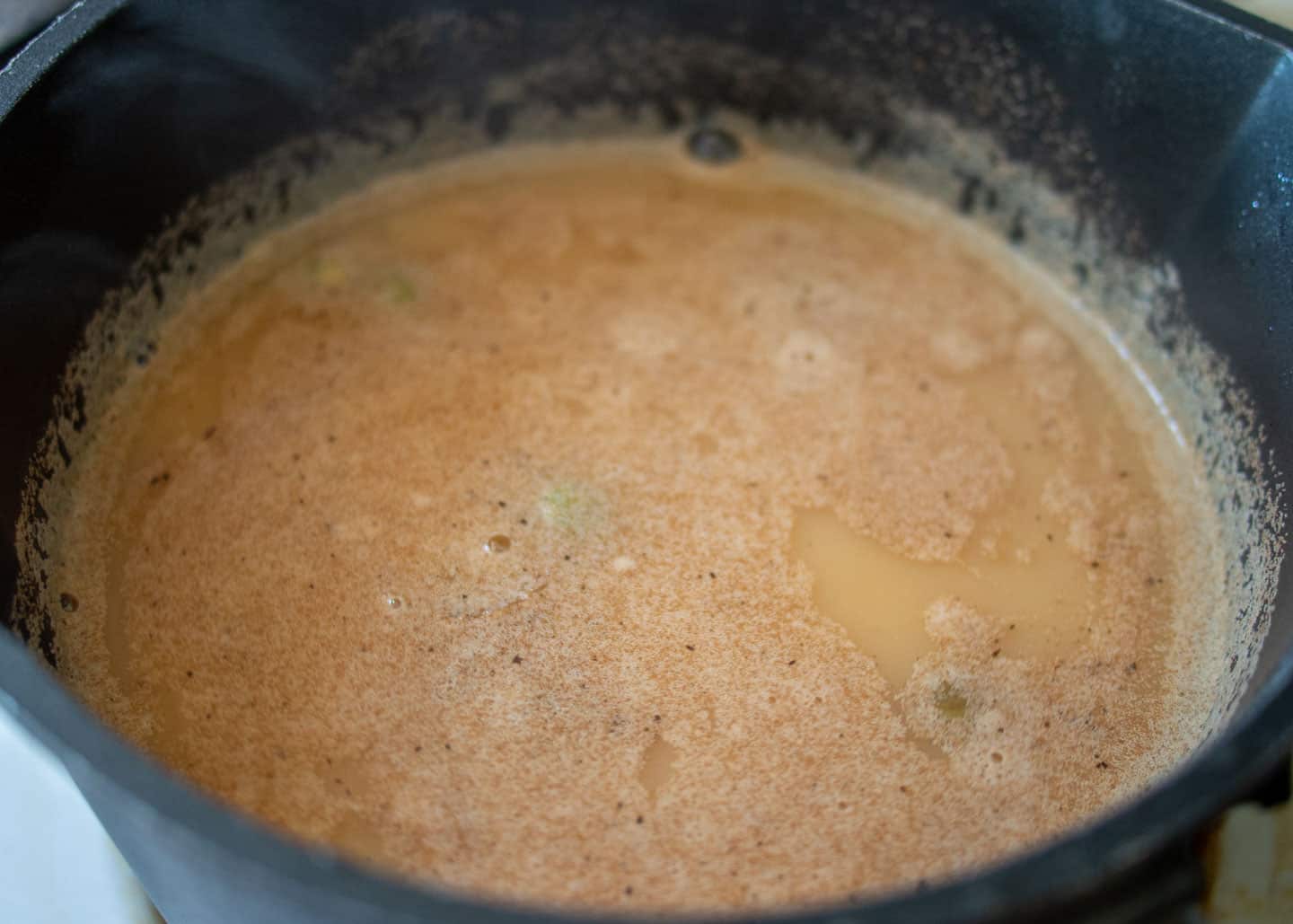 Once tea has steeped, option to add in honey. 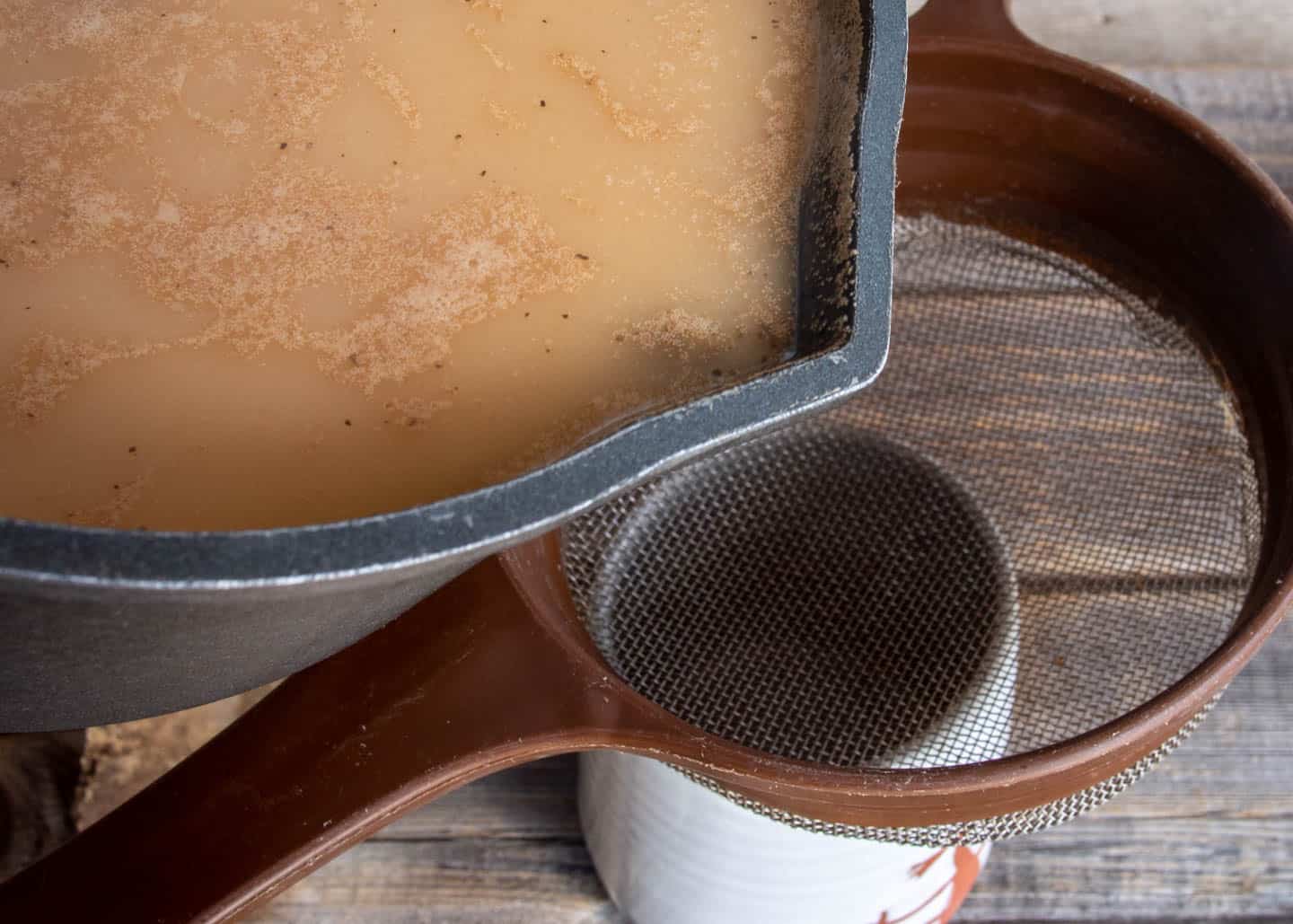 Strain the chai into 2 serving mugs. 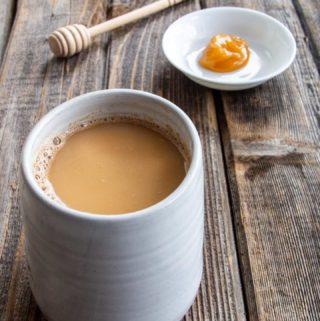 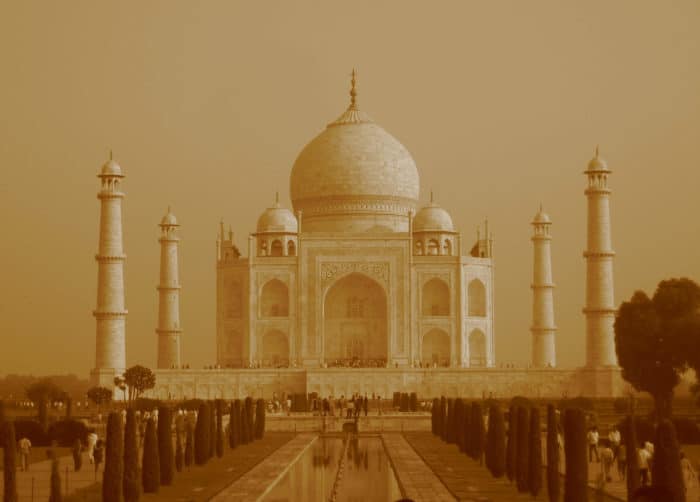