This simple pumpkin spiced latte recipe is a great low-sugar alternative to what’s available in coffee shops. It is dairy-free and packed full of nutrition. Make your own creamy cashew milk by blending cashews in a blender, no straining required. 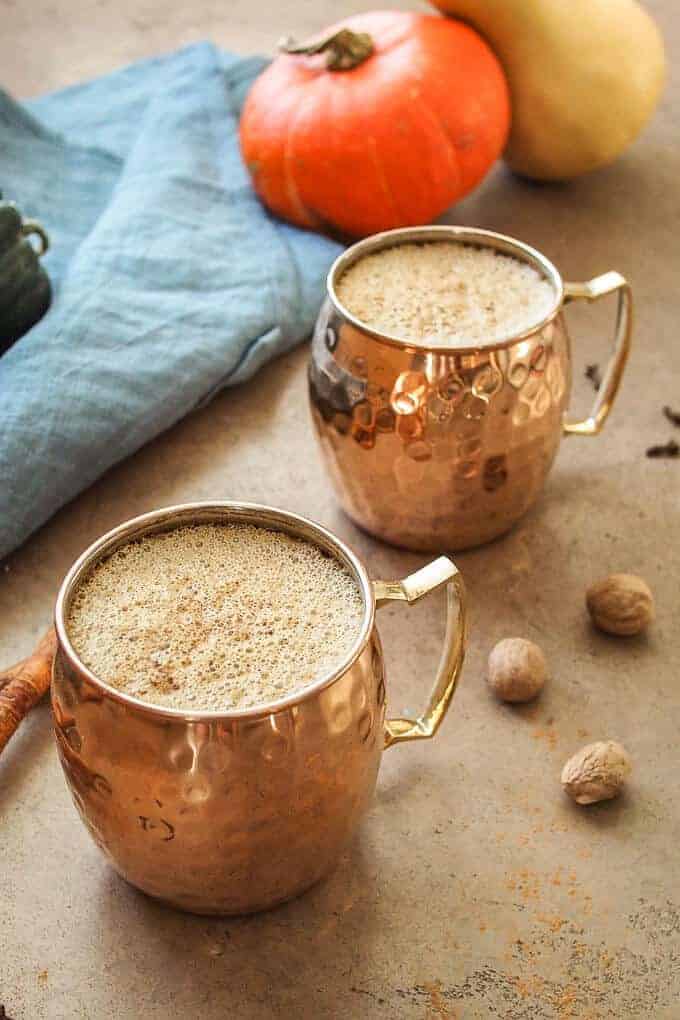 It’s hard to not get caught up in all the pumpkin spiced hype. Coffee shops have been on the train even before the leaves started to turn. Unfortunately, often they are so loaded with sugar and so not worth the post-latte crash. This healthier alternative to the sugar-loaded versions is a favourite, and I love using freshly brewed coffee , or leftover coffee, straight from my French Press. 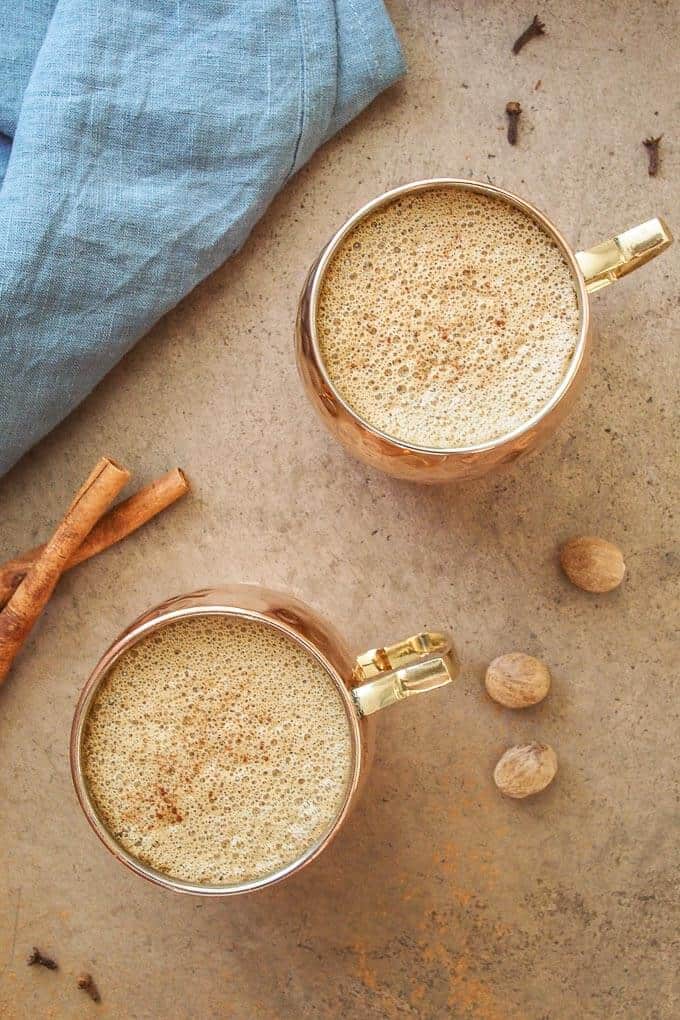 This recipe for pumpkin spiced latte uses only 1 tablespoon of honey or maple syrup per serving. Both these sweeteners have a lower glycemic index than regular table sugar, so will have a lesser effect on blood sugar levels. 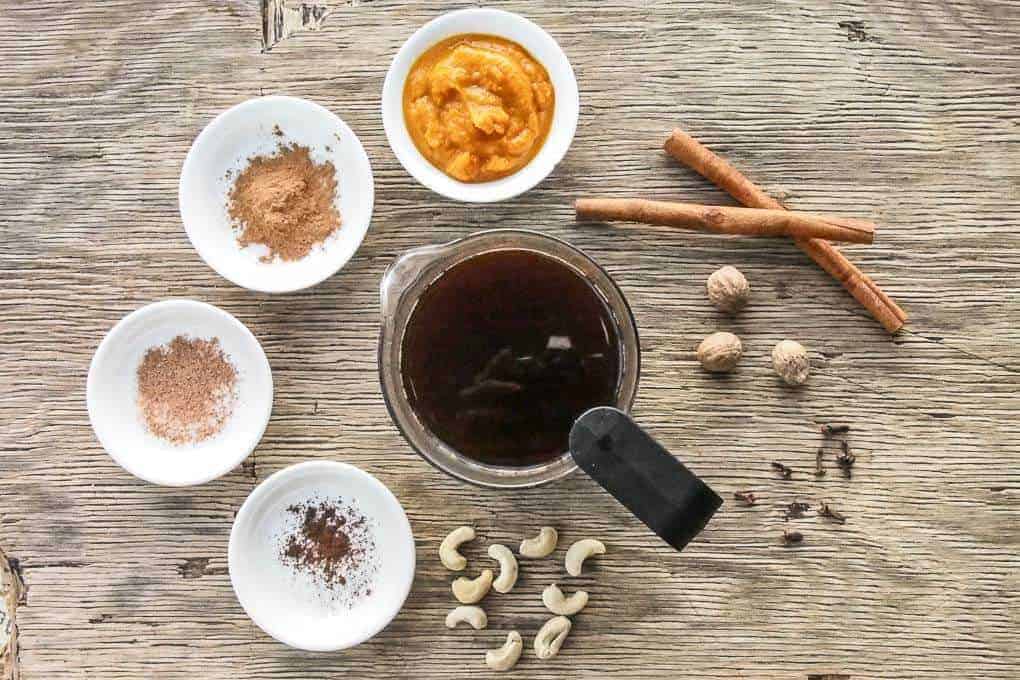 Several clinical trials have found cinnamon to have positive results for blood sugar-lowering in type 2 diabetics. Overall it appears that taking cassia cinnamon (note studies were not referring to Saigon cinnamon or Ceylon cinnamon) at doses of 120 milligrams to 6 grams daily for 4 to 18 weeks can significantly reduce fasting blood sugar levels (1,2,3,4). For reference, 2 teaspoons of cinnamon is about 5 1/2 grams. 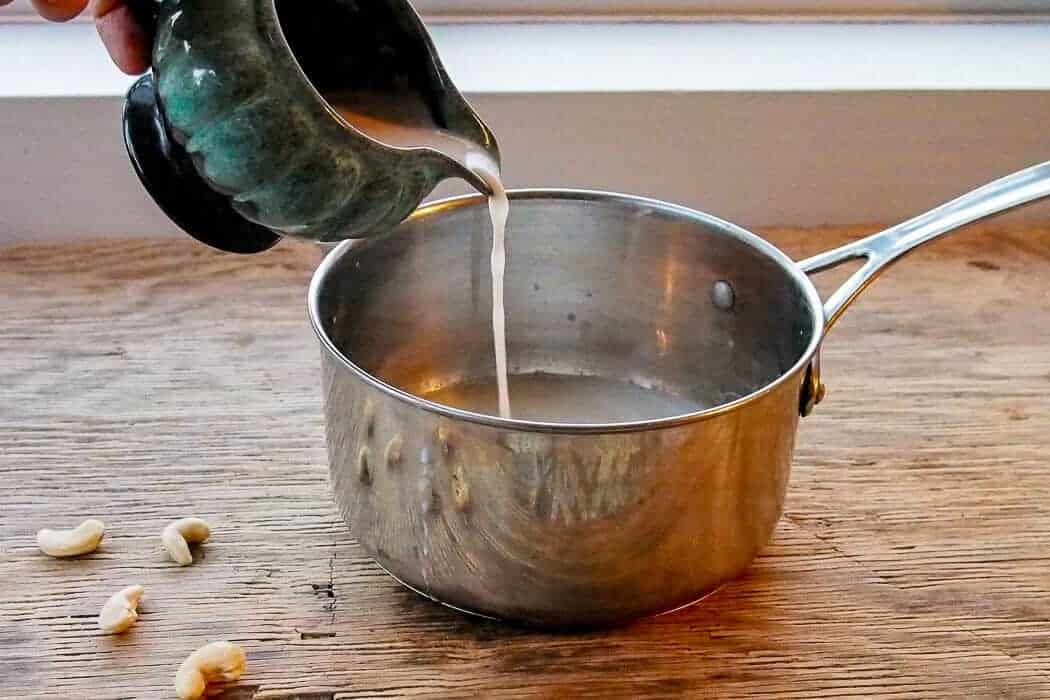 Pour the homemade cashew milk into the saucepan before heating it with the remaining ingredients.

A Pumpkin Pie Spice Blend can be pre-purchased, and generally consist of cinnamon, nutmeg, cloves and occasionally cardamom and ginger. At the beginning of fall, you can make a big batch and use it throughout the season. If you would like to make your own there are many recipes online, I usually use this one from Wellness Mama.

Milk alternatives with a very low-fat content, such as store-bought almond milk, cashew milk and coconut milk (not canned) will not produce a creamy coffee. For the creamiest consistency use a milk or milk alternative with a fat content. Organic soy milk works for this recipe, but I prefer it with homemade cashew milk (as per the recipe below), homemade almond milk or hemp milk. See recipe for Homemade Hemp Milk here.

Depending on which milk or milk alternative you use you may find that it ‘curdles’ if boiled. I have found this with canned coconut milk, and with homemade hemp milk. To prevent this, make sure you only gently heat your milk or milk alternative and as soon as you see bubbles forming, turn down the heat. Use a whisk to ensure that all the pumpkin puree is well incorporated.

My trick to getting a foam topping for this pumpkin spiced latte is blitzing it for a few seconds in my blender (I use my Vitamix which has a steam vent). The churning processes will get a nice layer of bubbles to form which is my at-home-version of a latte. 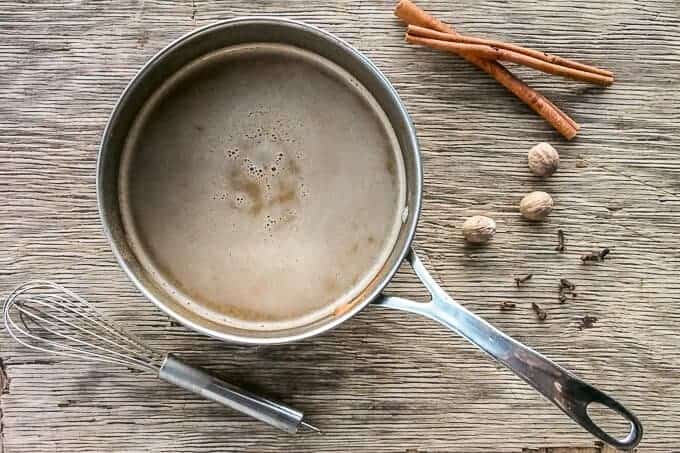 The blended ingredients for this pumpkin spiced latte, gently heated on the stove-top before serving.

Warm the milk alternative up on the stovetop with the spices. Instead of adding the coffee to heat it up, take the spiced milk alternative off the heat and then add the leftover coffee. Add this, along with 1/2 cup of ice cubes to your blender for a refreshing iced pumpkin spiced latte.

Many canned products are lined with BPA. I have found a brand of organic canned pumpkin puree, and the liner is BPA-free. I have tried using freshly cooked and pureed pumpkin, which is much more difficult to blend but still tastes great.

Pumpkin Spiced Latte Without The Puree

When you purchase pumpkin-spiced drinks at cafes, generally ‘pumpkin spice’ has nothing to do with pumpkin, but instead refers to the blend of spices used (cinnamon, nutmeg, cloves, cardamom and sometimes ginger). By omitting the pumpkin you will still technically have a ‘pumpkin spiced latte’. 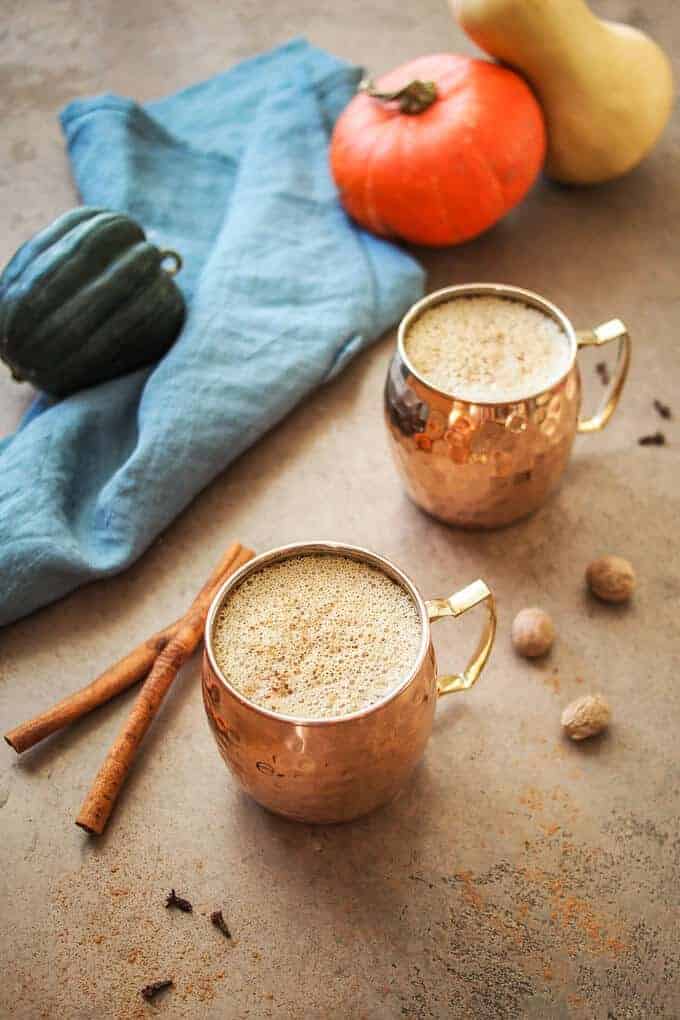 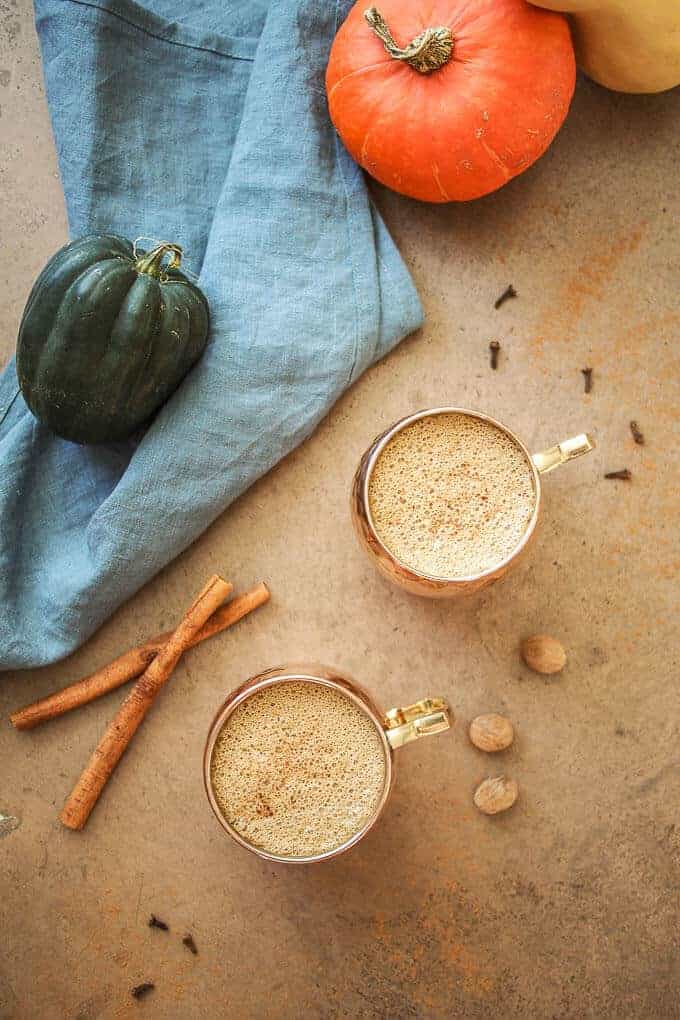 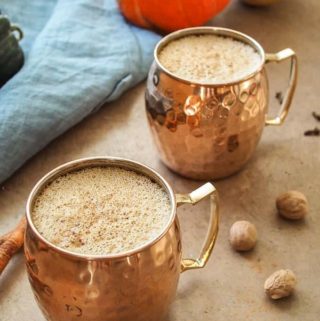 Make it Vegan: Use maple syrup in place of honey. No High-Speed Blender: Use organic soy milk in place of cashew milk. Make it Simpler:Use a pre-purchased or pre-mixed pumpkin pie spice mix, or even a chai mix will do. Use a store-bought milk alternative such as organic soy milk or cashew milk. Use a Premade Pumpkin Pie Spice Blend: Use 1 1/2 to 2 tsp of pumpkin pie spice blend. Making It Without Pumpkin Puree: Simply omit the pumpkin puree - pumpkin spice is really about the cinnamon, nutmeg and cloves. Making an Iced Pumpkin Spiced Latte: Do not eat the coffee. After heating the cashew milk and spices, add to a blender with coffee and 1/2 cup of ice. Nutrition Analysis uses full honey amount and soy milk with added calcium.