This roasted rhubarb apple crisp recipe is so simple – with only 6 ingredients and minimal prep time. The crisp topping is based on oats, and uses oat-flour from blended oats. It is free of refined flour and refined sugar, and has 5 grams of fibre per serving. 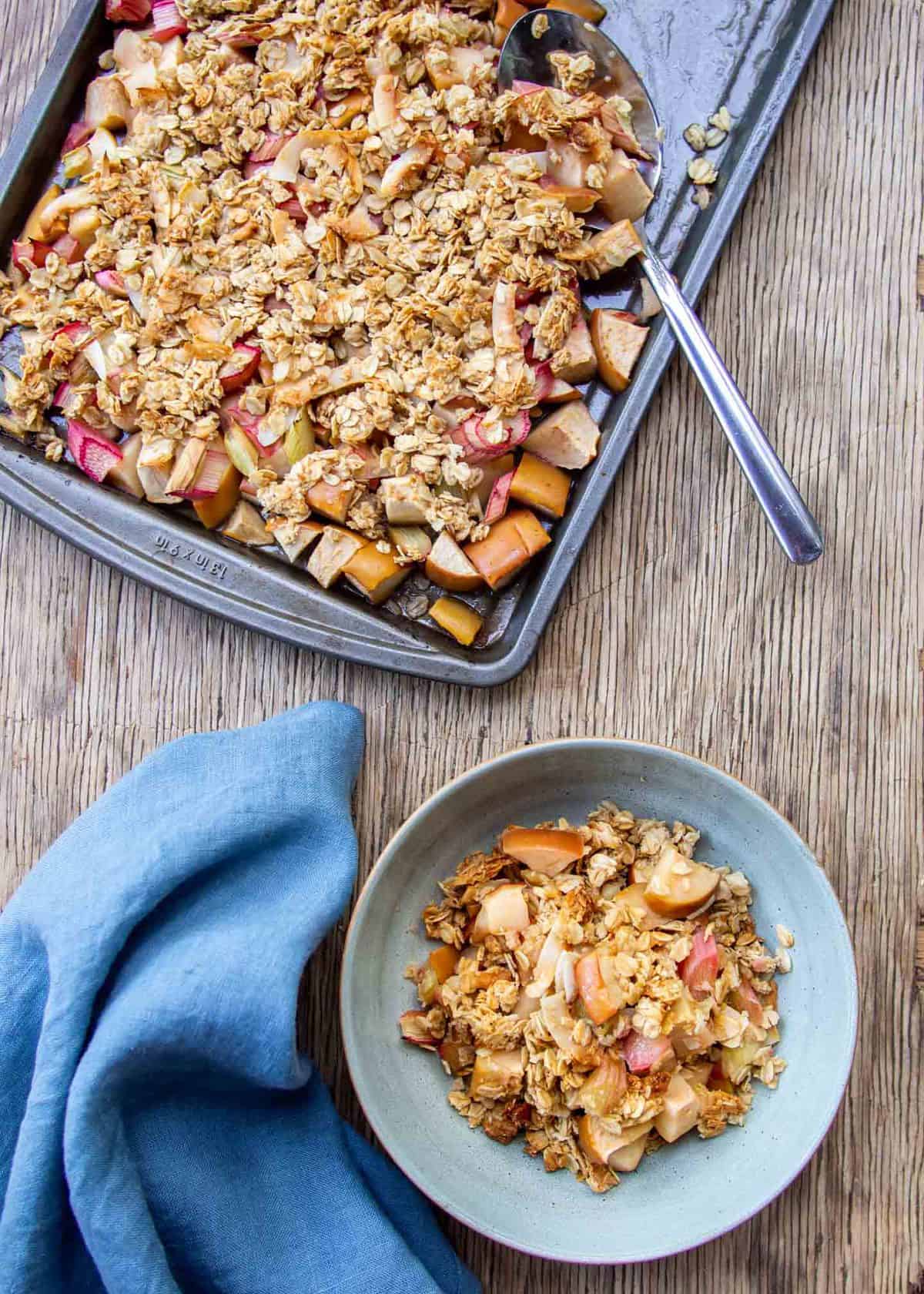 I love roasting the rhubarb first to help save on prep time. In a conventional rhubarb crisp, the rhubarb and apple are cooked on the stovetop first, to break down prior to putting them in the oven with the oatmeal topping. By baking the rhubarb and apple first you cut back on dishes and also time spent in the kitchen. This is one of my favourite crisp toppings – a flour-free crisp, which I love using on all my crisps, such as on this Healthy Oat and Honey Cranberry Crisp. 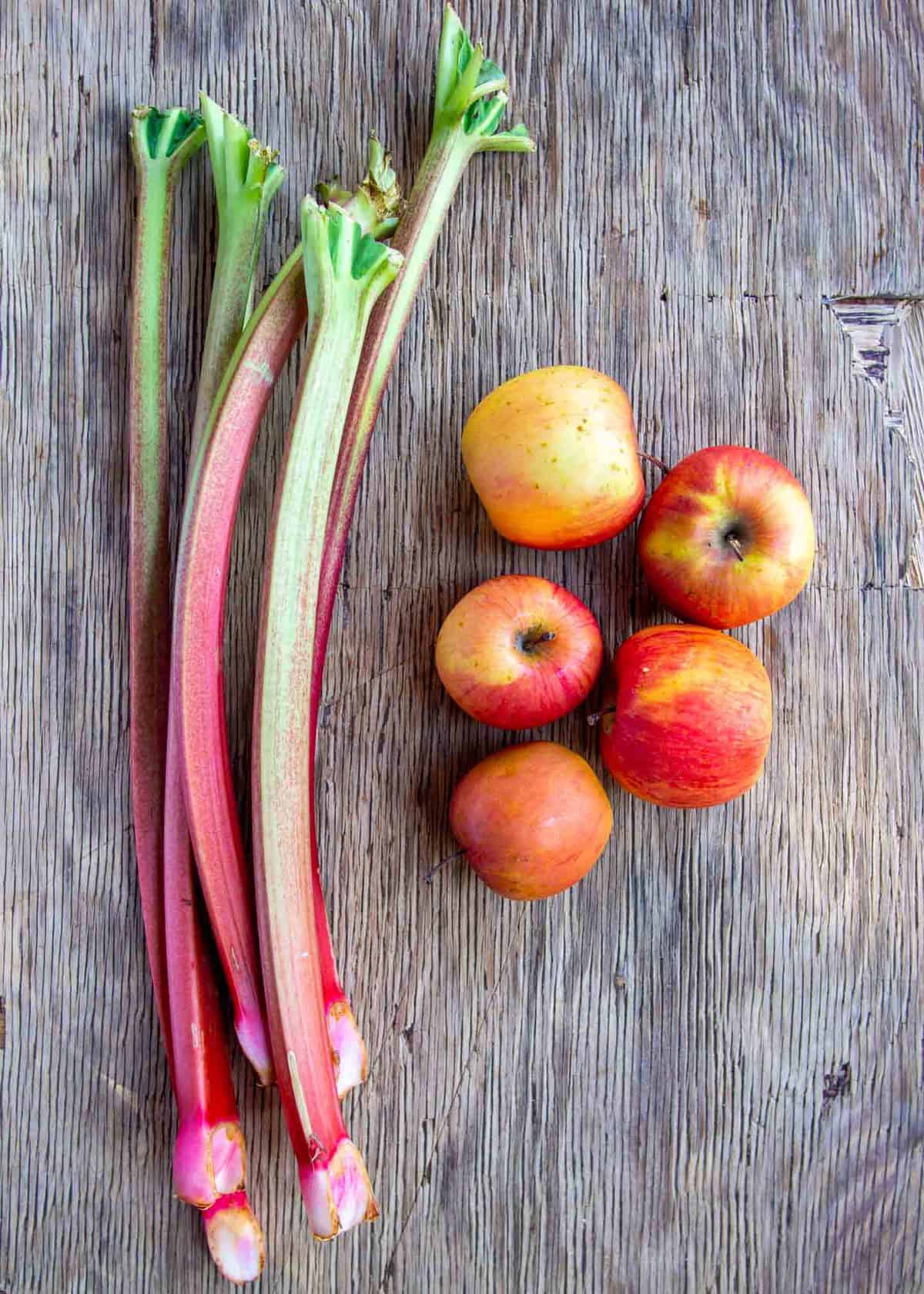 Fibre helps to lower our blood sugars, cholesterol levels and helps to keep our gut bacteria nice and happy. I love sharing high-fibre desserts, like these Seedy Peanut Butter Oatmeal Cookies as alternatives to recipes based on white flour. The crisp topping is based on high-fibre oats, I like adding a little bit of coconut flakes for texture, but any nut or seed can be used as well.

This crisp is sweetened with honey which has a lower glycemic index than regular sugar, making it a better choice for blood sugar levels. It is also flour-free, and instead uses oats that have been ground up into ‘oat-flour’. Oats are not only a high-fibre replacement for regular flour (like in these Three Ingredient Banana Pancakes), but they are also a great low glycemic index choice. This crisp contains 32 grams of net carbs, making it a suitable diabetic dessert when served with some high-protein Greek yogurt.

Coconut oil is an easy replacement for butter and adds to the flavour of the coconut, which goes so nicely with the rhubarb and apple combination. Serve it with some dairy-free ice cream, such as coconut ice cream. 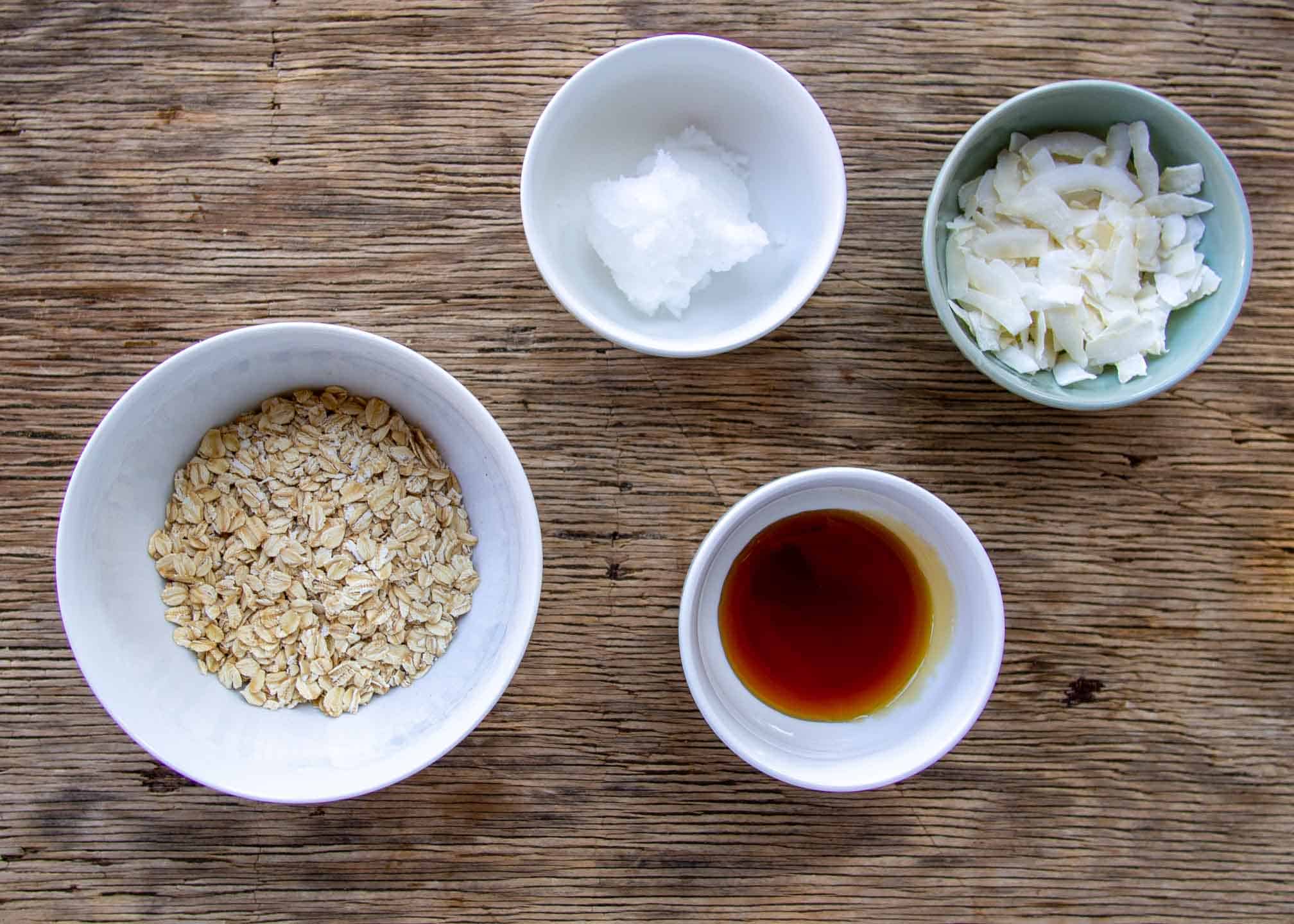 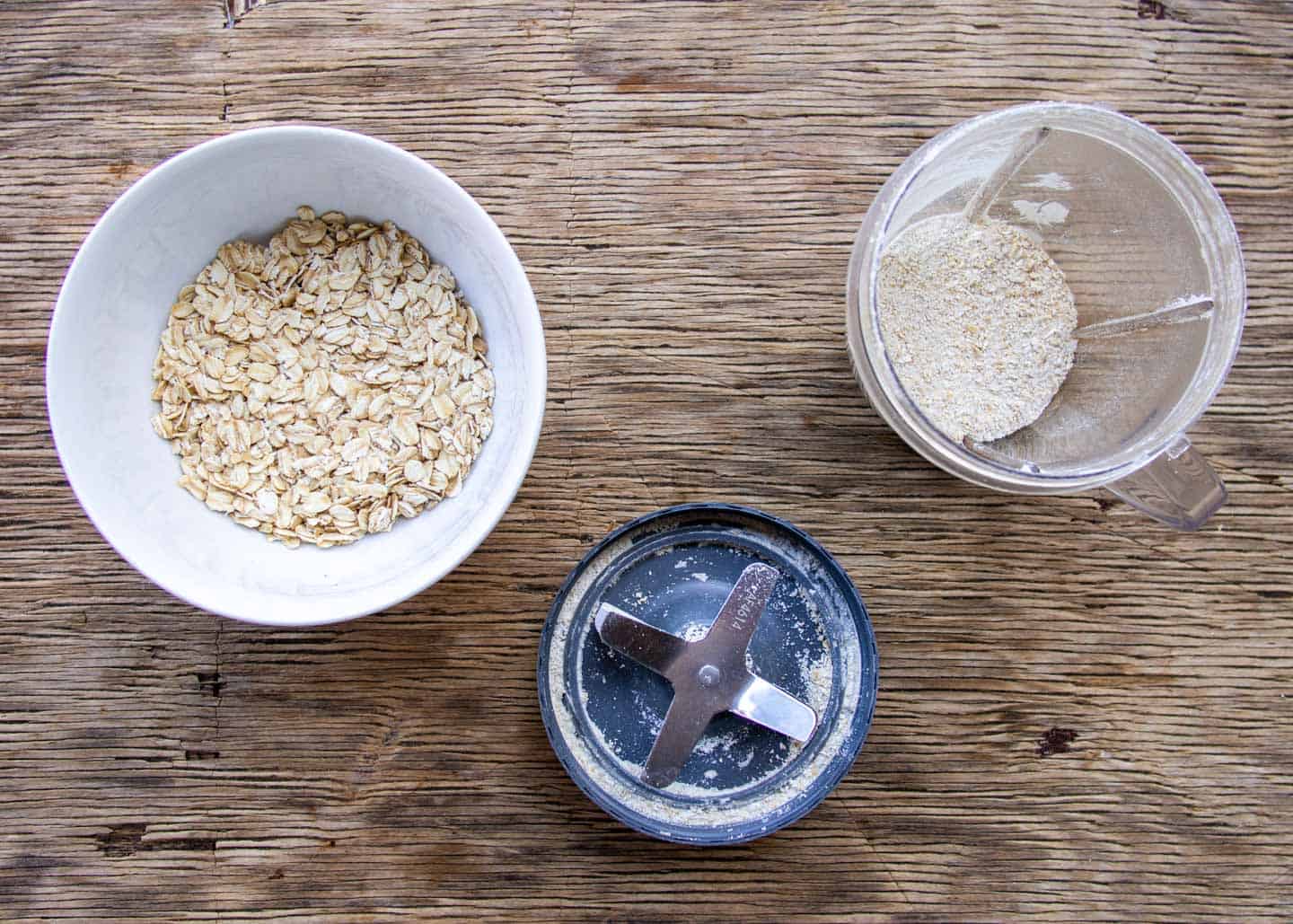 Blend whole oats in a blender to make oat flour.

How To Make Oat Flour

Use a small blender or food processor to make the oat flour. When you are measuring out whole oats you will measure out more than the quantity of oat flour you need. As an example, for this recipe, you would measure out about 1/3 cup of whole oats to make 1/4 cup of oat flour. This is because the oats become more condensed after blending.

Leaving The Skin On The Apples

I like to leave the skin on the apples to increase the overall fibre of the dish, making it a better choice for blood sugar levels. The skin and the flesh of the apple just under the skin is also where many of the important nutrients are. 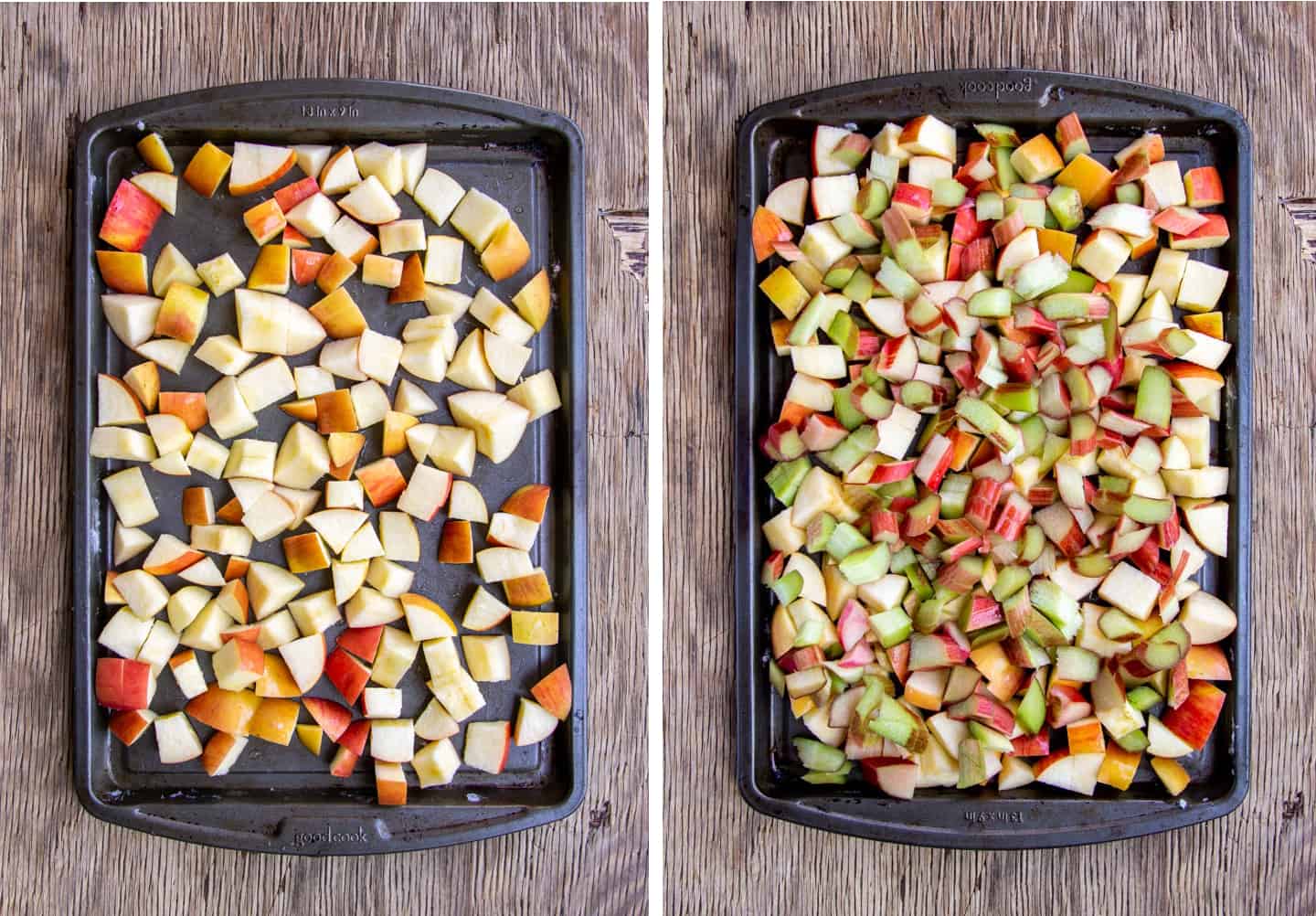 This crisp is naturally gluten-free because it does not use regular flour. If you are serving it to someone who has celiac disease, just make sure that the oats are certified gluten-free, as oats can potentially become contaminated during processing.

What To Serve This Rhubarb Apple Crisp With

I love serving this crisp with some coconut-based ice cream. For those who have dairy, they might choose some plain yogurt, Greek yogurt, or regular ice cream. The high protein content of Greek yogurt helps to reduce any blood sugar spikes from the fruit, honey, and oats by slowing down the digestion of these carbohydrates into sugar. 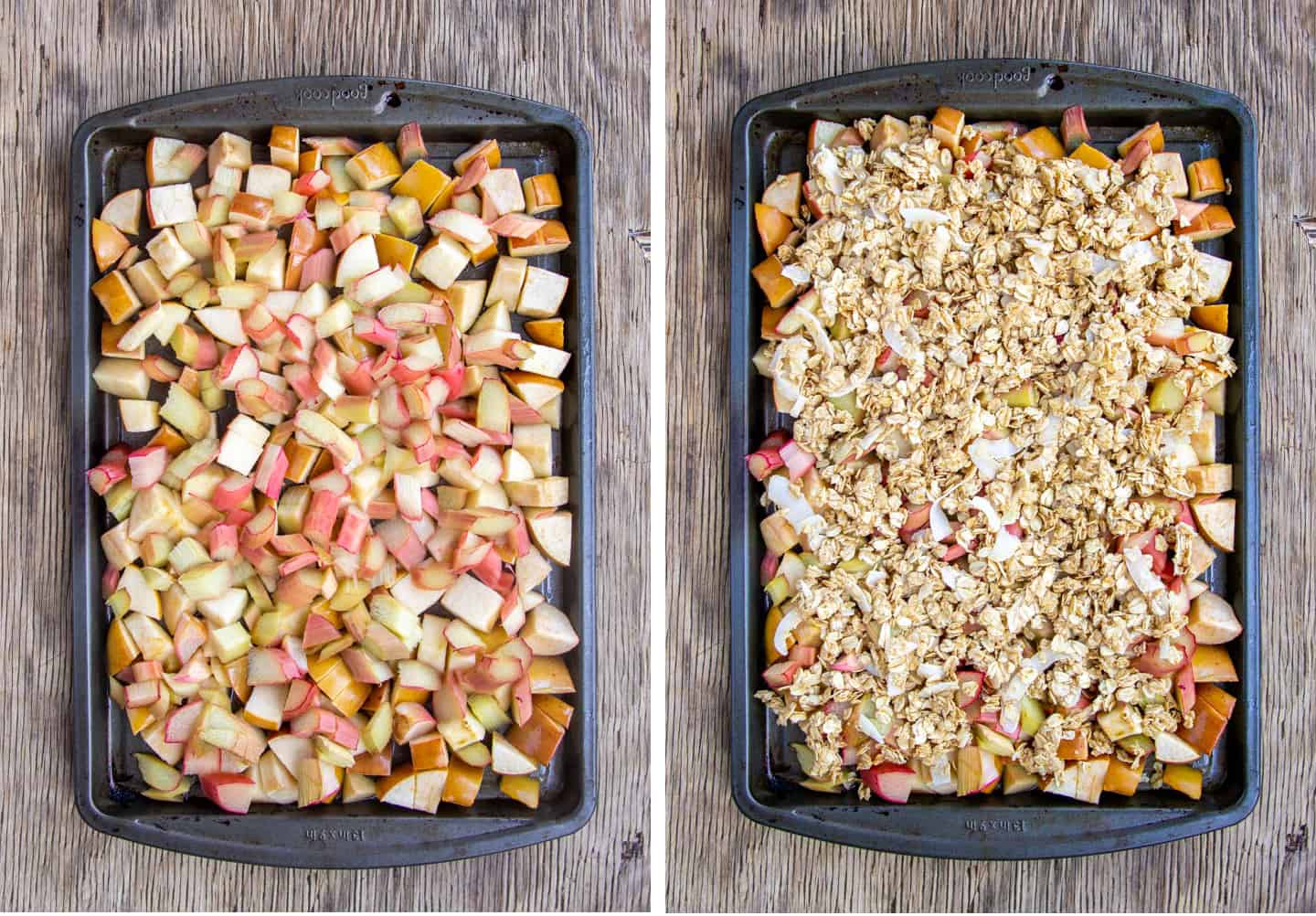 Remove the roasted rhubarb and apple from the oven after 15 minutes and add the crisp topping. Return to oven for another 20 minutes.

Strawberries do not need to be roasted ahead of time. If substituting in strawberries for the apples, roast the rhubarb as per recipe directions and then add 3 cups of halved strawberries and top with crisp topping and bake for 20 minutes.

The same with strawberries, blueberries do not need to be roasted ahead of time. Add 2 cups of blueberries after the rhubarb has been roasted, and then top with the crisp topping.

If you’re lucky enough to get your hands on saskatoon berries, you can substitute in 2 cups of Saskatoon berries for the apples. Add the berries to the already roasted rhubarb. I suggest drizzling over 1 tablespoon of additional honey to sweeten the fruit mixture, before adding the crisp topping. 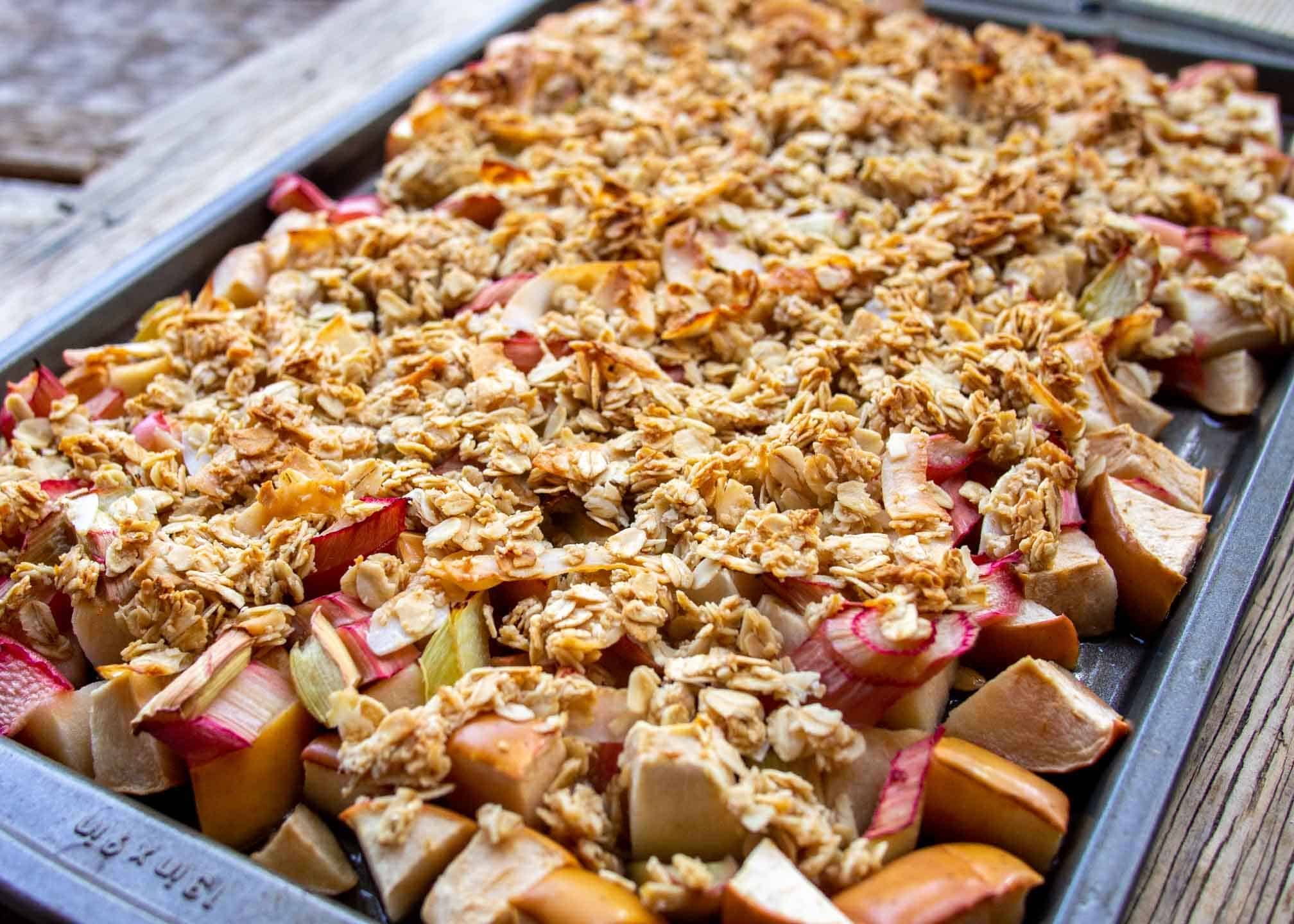 Oats are a great base for desserts as they add beneficial soluble fibre and can replace refined flours in many desserts. Here are a few of my favourite dessert recipes featuring oats: 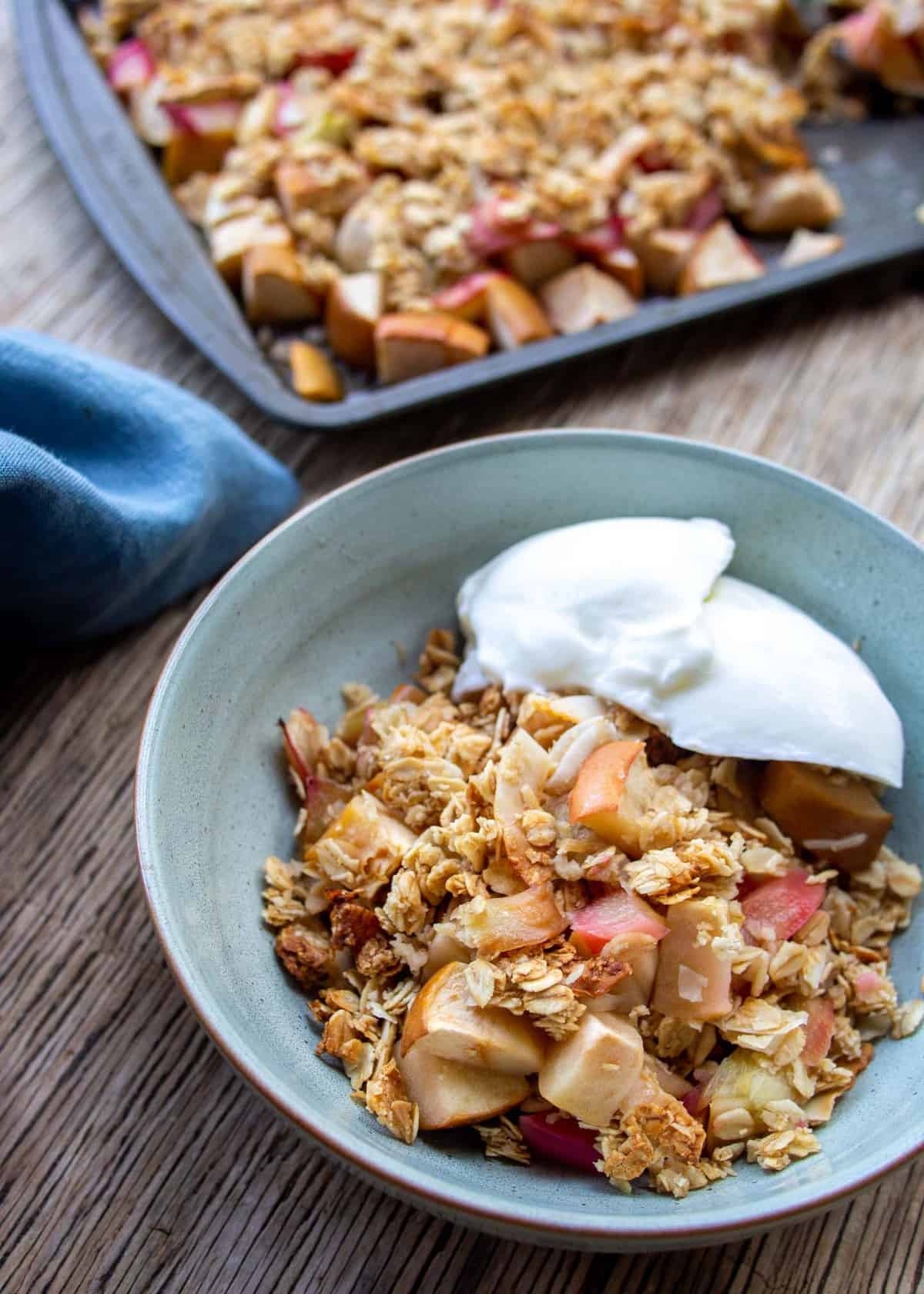 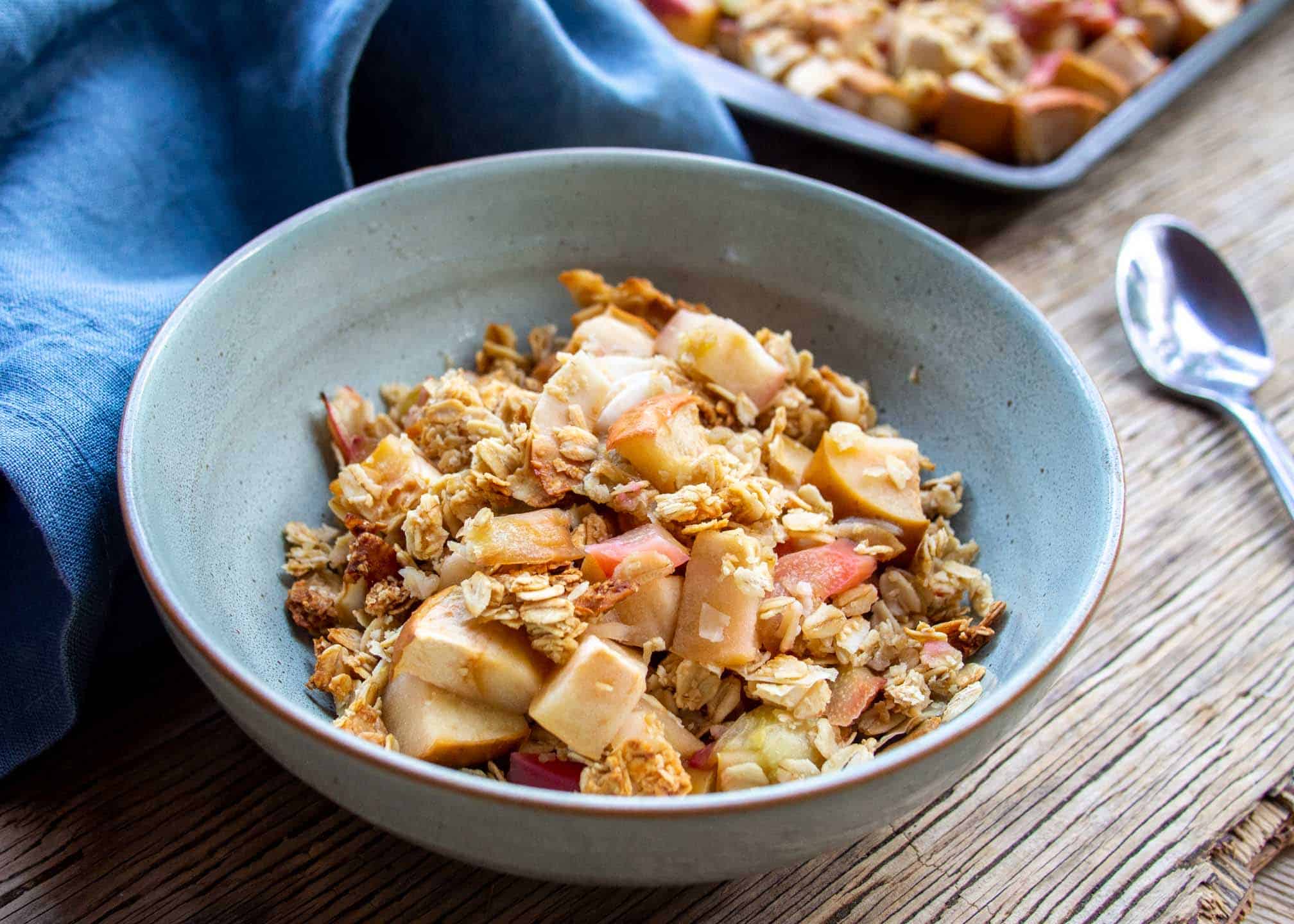 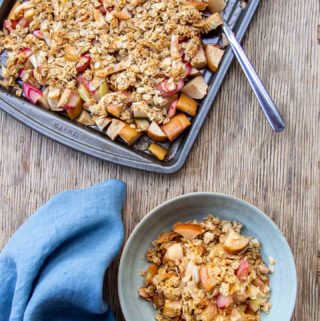 To Make The Crisp Topping

This crisp is naturally gluten-free because it does not use regular flour. If you are serving it to someone who has celiac disease, just make sure that the oats are certified gluten-free.

What To Serve This Rhubarb Apple Crisp With

I love serving this crisp with some coconut-based ice cream. For those who have dairy, they might choose some plain yogurt, Greek yogurt or regular ice cream.