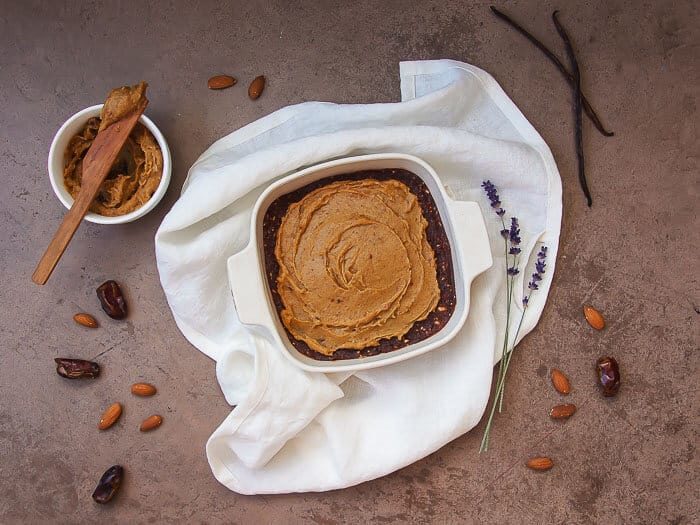 This raw chocolate brownie recipe is so simple to make, using only 5 ingredients and one bowl (or food processor). The combination of sweet dates and creamy nuts give a texture similar to traditional brownies, and most wouldn’t even be able to tell that it is completely raw. With only whole-food ingredients, the use of cacao powder bumps up the antioxidant properties which have been associated with many health benefits (see below). 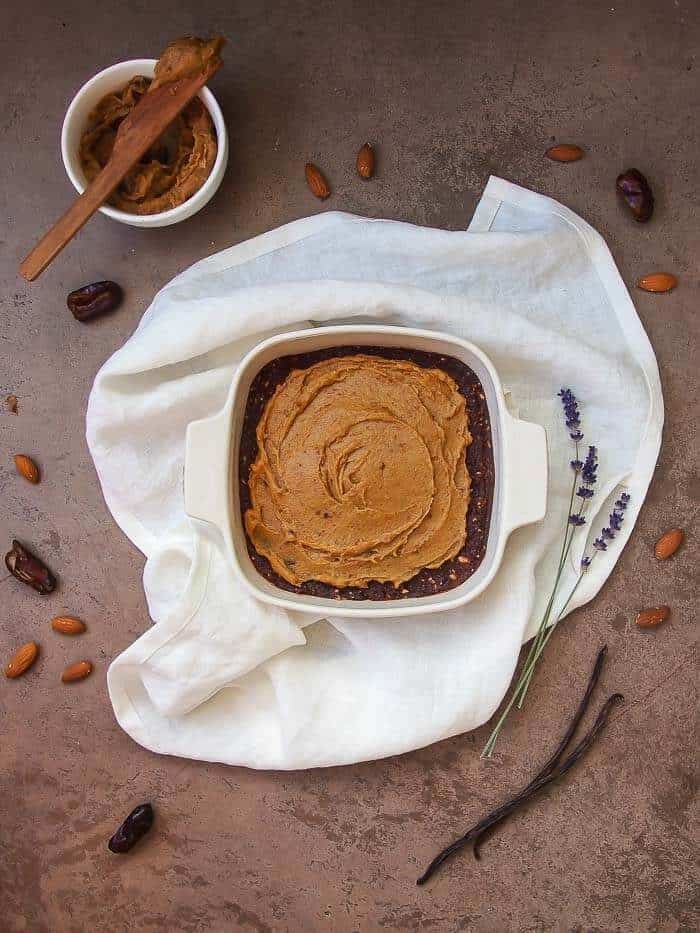 Cacao is a source of phytonutrients called polyphenols, including epicatechin and catechin, which are known to have beneficial effects on mood and cardiac (heart) health.

In a small randomized controlled trial, outcomes showed that participants who consumed cacao polyphenols had a significantly increased self-rated calmness and contentedness relative to placebo (1). Another randomized controlled trial showed that supplementation of cocoa flavanols had a positive effect on visible facial wrinkles and skin elasticity (2). Some evidence suggests cardiovascular benefits from cacao for those who have a pre-existing cardiovascular disease (3), and a blood pressure lowering effect which is thought to be associated with the formation of endothelial nitric oxide which promotes vasodilation (4). 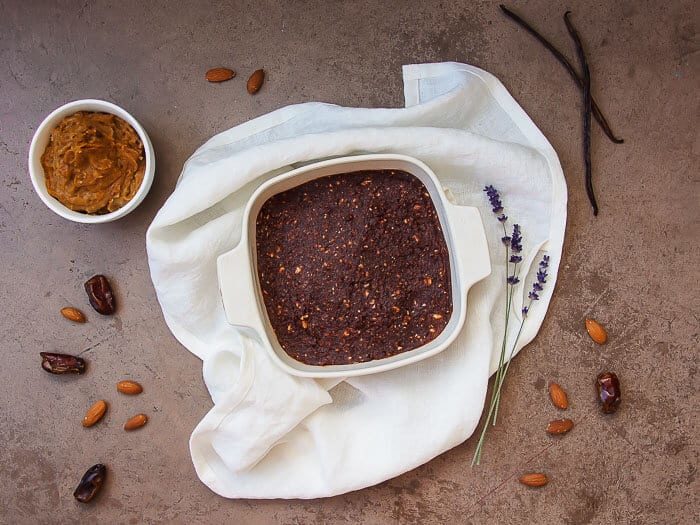 Which Is The Healthiest Chocolate?

*Regular cocoa is quite strong and it is somewhat bitter. Its natural acidity makes it preferable for use in baking. Dutch cocoa has undergone alkalization to reduce its natural bitterness and its smooth, rich and mellow flavour is useful for hot cocoa and other chocolate drinks.

The Sustainability of Chocolate

Food-miles, which addresses the distance a food has traveled to reach our plates and relates this to our carbon footprint, is important to consider when purchasing cacao, as well as dates, cashews, and almonds which are all used in this recipe. Though, it has been demonstrated that those who have a smaller intake of animal protein may not need to worry so much as the carbon cost of food miles and transporting food which is small in comparison to the carbon costs of production of animal protein. Harvard University reports that following a more plant-based approach to eating is more effective at reducing our carbon footprint than counting food-miles (7).

Focusing only on carbon footprints can leave us naïve to other important issues surrounding cacao including farmer rights and other fair trade issues. Recognizing the value of purchasing Fair Trade is imperative, and as global citizens, we can vote with our dollar for fair wages and rights for the people that produce our food. Purchasing Fair Trade Cacao ensures fair wages for farmers, and producers generally follow organic farming practices which will have additional sustainability benefits. 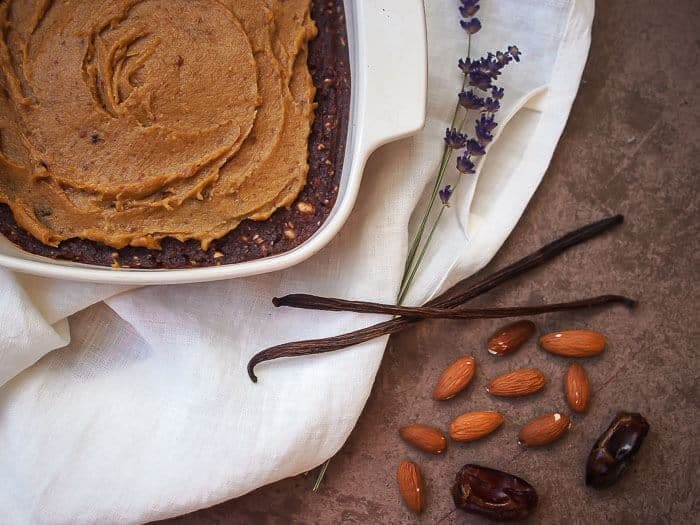 How To Make This Raw Chocolate Brownie

This recipe works best in a quality food processor or Vitamix. If you are not confident in the quality of your food processor, try doing it in smaller batches and make sure to process the nuts prior to adding the other ingredients (but do not ground nuts into a flour, leave some chunks). You may find you need to do the mixture in a few smaller batches.

For the caramel icing use, a store-bought cashew butter or make your own using soaked cashews, and don’t forget the pinch of salt which really extends that caramel flavour. With my Vitamix, I need to double the cashew butter recipe for the right volume of mixture to blend properly (1 cup of cashews). Use the additional cashew butter to make another portion of caramel icing to have it with a sliced apple for a tasty sweet treat, or keep the cashew butter as is and use as you would any other nut butter. 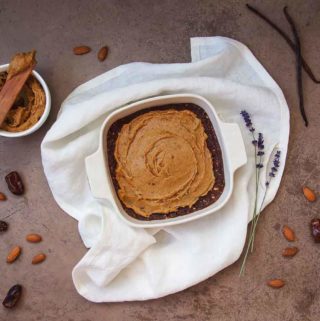 This brownie recipe is so good that nobody will be able to tell its 100% raw. It makes a great, healthy alternative to store-bought chocolate, or baked goods which can contain refined grains empty of nutrients. The optional, but highly recommended raw caramel icing is reliant on that pinch of salt for that caramel flavour. Best served cold, but it will be hard to not eat the brownie straight from the bowl.
Prep Time15 mins
Resting Time1 hr
Total Time15 mins
Course: Dessert
Keyword: date brownie, raw brownie
Servings: 16
Calories: 180kcal

How to make cashew butter: Soak the cashews in water for at least 4 hours, preferably overnight. Drain the cashews and place in a high-quality food processor or Vitamix (I use a Vitamix). Blend until a smooth butter forms, scraping down the sides as needed. I find that I need to make double the recipe (1 cup of cashews) for the blade to efficiently blend all the cashews. Save remaining cashew butter and eat as you would any nut butter. Nut variation: Try pecans instead of walnuts or almonds.
Flavour variation: Add 1 tsp of cinnamon to the mixture. Nutrition Information based on one square with caramel icing.