You are here: Home / All Recipes / Breakfast / Smoothie Bowl with Cauliflower and Greens
Jump to Recipe Print Recipe 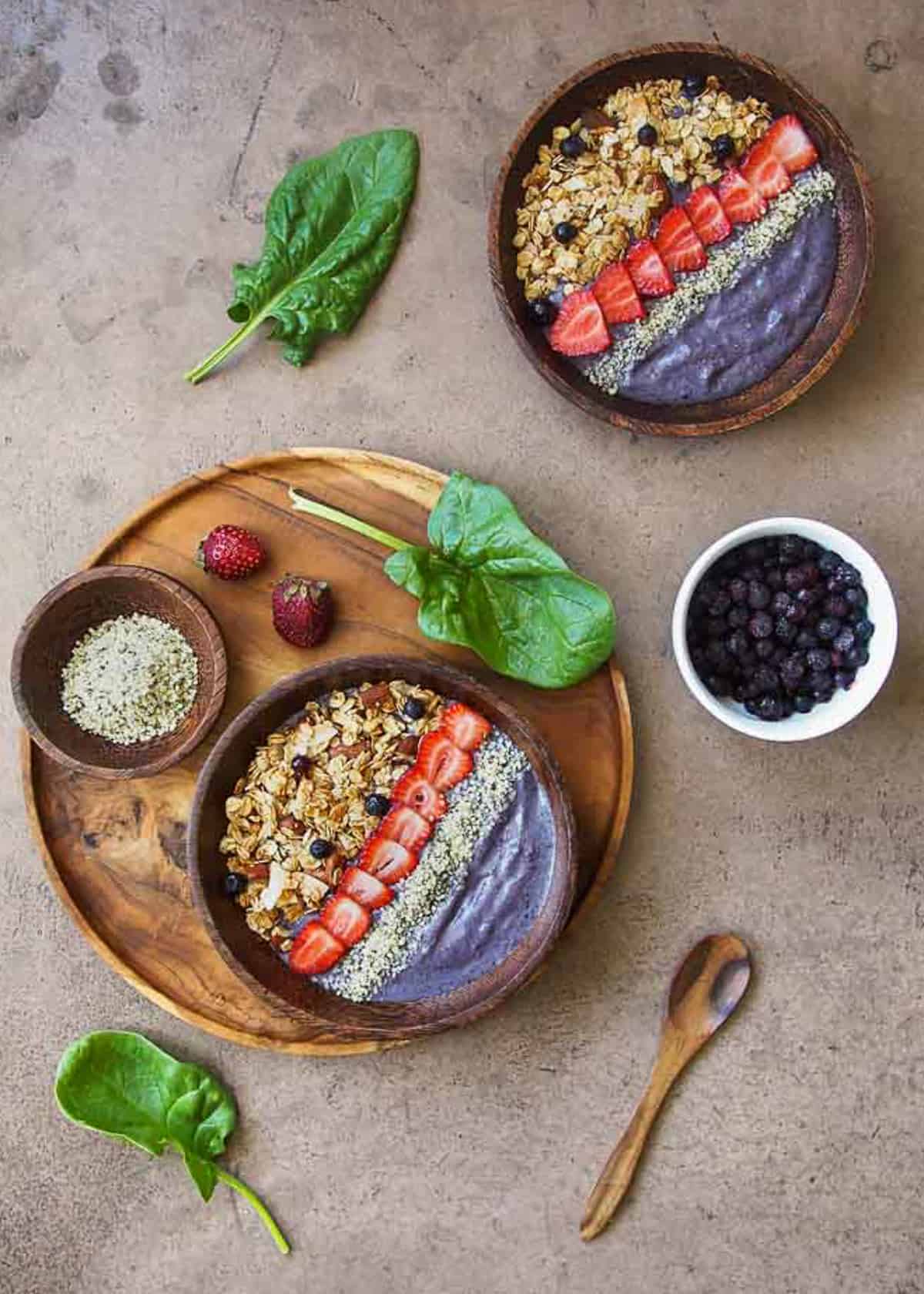 I’ve been really into making banana-free smoothie bowls lately. For me, the omission of banana is only possible with the inclusion of frozen cauliflower for texture, as well as berries for natural sweetness. When combined with some healthy fats from nut butter, and some greens from zucchini and spinach we have ourselves a nutrient-dense breakfast that won’t spike blood sugar levels. 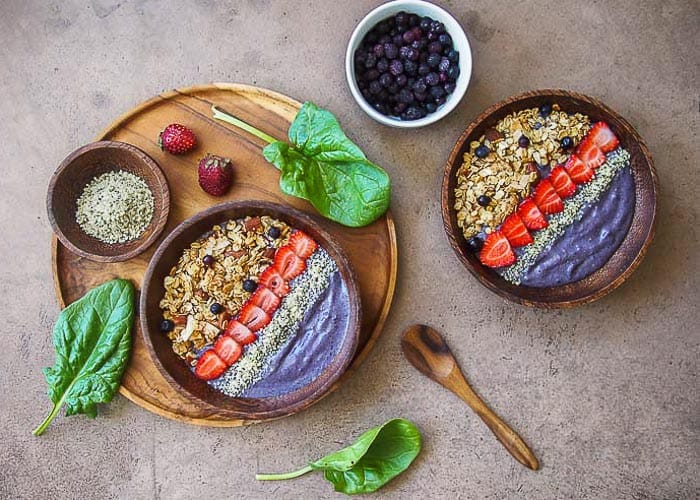 When we think smoothies, we often think banana, dairy and even juice. The fluid consistency of smoothies and smoothie bowls means they pass through to our digestive tract relatively quickly, and the natural sugars (from the fruit and/or dairy) are released into our bloodstream quickly, resulting in a post-smoothie blood sugar spike. Being conscious of the carbohydrate content of smoothies helps prevent any large fluctuations in our blood sugar levels.

The majority of the bananas we have in our grocery stores come from Central America. Some consumers may be conscious of not only the associated food mileage but also of poor working conditions and environmental standards of the Banana Industry.

A Low Carb Smoothie for Diabetes

The Glycemic Index is a rating of how quickly a food will break down into sugar in our bodies. Bananas are technically a medium glycemic index fruit meaning they will have a moderate effect on our blood sugar levels. When we consider their glycemic load of 12, we understand that their higher carbohydrate content in relation to size will spike our blood sugars more than say the same weight of blueberries, which have a glycemic load of 5.

The phytonutrient glucosinolates in cauliflower and other cruciferous vegetables are well studied and are known to provide a variety of health benefits including their cancer-protective effect (2). Cauliflower retains the most amounts of nutrients when consumed raw, or when steamed for no more than 10 minutes, or lightly sauteed. Boiling or blanching can destroy up to 40 percent of its cancer-fighting compounds (3,4).

Adding Greens To a Smoothie Bowl

Spinach is one of the top sources of folate, and having it raw protects up to 25% of that folate. Zucchini is something you might not think to add to smoothies, but its smooth consistency pairs well. Zucchini, as well as spinach, is high in lutein and zeaxanthin, two carotenoids that protect our cells again free radicals. 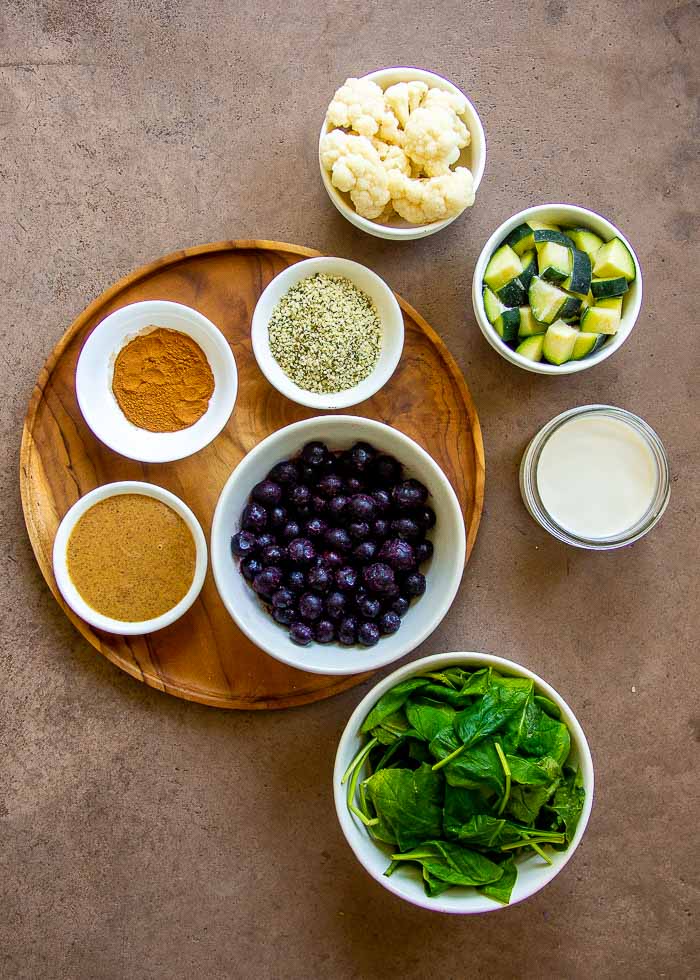 Ingredients for Low Carb Smoothie Bowl with Cauliflower and Greens

A Vitamix works best for this smoothie to achieve the creamiest consistency. If you don’t have a Vitamix, you may have to blend the smoothie bowl ingredients for a longer period to achieve a smoothie consistency. 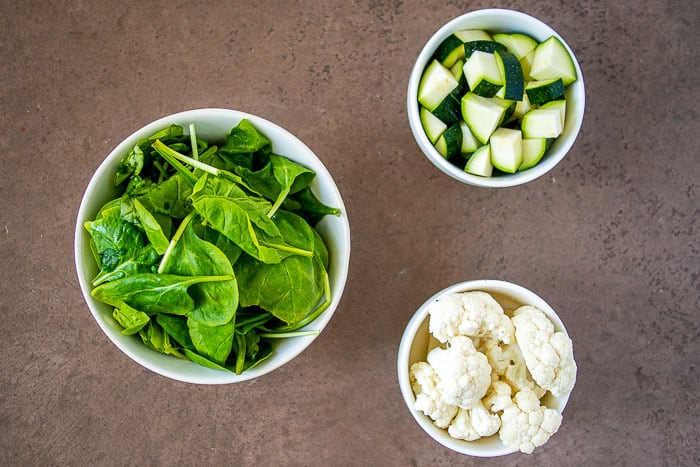 Fresh Zucchini, Spinach and Cauliflower ready to freeze. Option to steam cauliflower prior to freezing for a creamier consistency.

This smoothie bowl works best with frozen cauliflower and zucchini, though non-frozen can be used as well (see tips). Option to steam the cauliflower first, but if using a high-speed blender such as a Vitamix this step is not necessary. Frozen spinach is easy to have on hand, but fresh works fine as well. 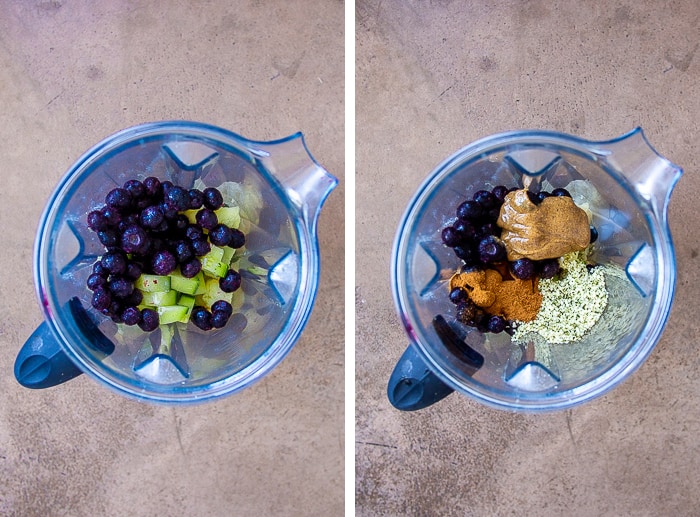 Add all of the ingredients to a high-speed blender and blend until smooth.

For those who like the addition of yogurt in their smoothie bowls (coconut for vegans), try adding 1 cup of plain yogurt as well as the remaining ingredients as per the recipe. This will result in a slightly less firm smoothie bowl, but a more creamy mouthfeel.

Greek yogurt is a great way to bump up the protein content of any smoothie bowl. Try adding 1 cup of plain Greek yogurt in addition to the ingredients as per the recipe for an additional 8-10 grams of protein per serve.

Peanut butter can be used in place of almond butter in the smoothie bowl. The addition of a healthy fat is essential for satiety (keeping full) and sensory. Healthy fats offer a delicious flavour and mouthfeel – you won’t even miss the carbs.

Add one diced and deseeded avocado to the smoothie bowl to increase the healthy fats, which will keep you going for longer and result in more stable blood sugar levels. Even better if you can freeze your avocado beforehand – be sure to remove the avocado flesh from the skin and seed before freezing for easier use in your next smoothie bowl.

Coconut milk can be used in place of the milk alternative. Using coconut milk from the can increases the fat content of the smoothie bowl which will keep you fuller for longer and offer a more creamy and delicious smoothie bowl. Try making your own coconut milk, like in this Prebiotic Chickpea Smoothie Bowl.

I love adding greens to my smoothie bowls. Spinach has a slightly less bitter taste than kale, though kale or any other green can be used. I often encourage kale over spinach because of the absence of calcium-binding oxalates (see post Bone Health and Calcium For Vegans). As this smoothie bowl does not contain a high amount of calcium, using spinach is fine.

If using a milk-alternative this smoothie is naturally vegan. If using granola, those following a strict vegan diet may look for one that does not contain honey.

People following a low-carb diet for various reasons. This recipe is naturally low in carbohydrates due to the omission of the banana and contains healthy fat from the nut butter. The total carbs are 18.7 grams, minus 7 grams of fibre equates to 11.7 grams of net carbs.

Raw vs Steamed vs Frozen Cauliflower for Smoothies

The greens are completely optional and I find that the taste is barely noticeable. The zucchini adds to the thickness of the smoothie (best when frozen but fresh works as well). Kale can be used in place of spinach. I suggest freezing any leftover vegetables from the week in a ziplock bag to use in your next smoothie bowl.

Making it in a Vitamix

Using a Vitamix or another high-speed blender is the best way to ensure the smoothest consistency. If you’re concerned about the power of your blender, you may need to add 1/4-1/2 cup more milk or milk-alternative to achieve the desired smooth consistency. 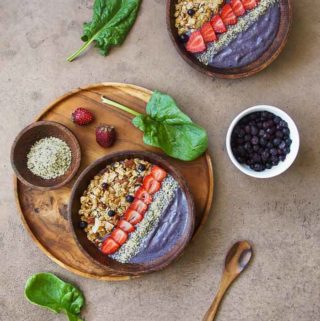 This Smoothie Bowl with Cauliflower and Greens Recipe is banana-free and uses frozen cauliflower to offer a creamy consistency. The greens from zucchini and spinach are complemented by the frozen berries. This is a low-carb and low glycemic index breakfast, meaning the low sugar content will not spike your blood sugar levels. Top with 2 tablespoons of additional hemp hearts for a total of 20 grams of protein!
Prep Time5 d 10 mins
Total Time15 mins
Course: Breakfast
Cuisine: Canadian
Keyword: Banana-Free Smoothie, Diabetic Smoothie Recipe
Servings: 2
Calories: 253kcal
Author: Rachel Dickens RD

*Option to steam the cauliflower first for a maximum of 10 minutes. Try steaming a large batch of it and storing it in the freezer. I also like to cut up and freeze zucchini chunks and loose spinach in a freezer bag for quick access in the morning. This recipe also works if the cauliflower has not been steamed, as well as if the zucchini has not been frozen. Use less milk alternative, or the consistency will be too runny. Short on time? Try it with un-frozen raw cauliflower and zucchini. Add less milk alternative (about 3/4 cup) to keep the consistency of a smoothie bowl Boost the Calcium: Try kale instead of spinach. Add chia to the smoothie bowl in place of hemp hearts. Boost the Protein: Top with an additional 2 tablespoons hemp hearts each serving for a total of 20 grams of protein Boost the Healthy Fats: Add 1 diced and frozen avocado, and use canned coconut milk in place of milk-alternative Eat Seasonal: Try blackberries instead of blueberries when they are in season.
Nutrition Analysis was done with no-toppings for the smoothie bowl

1. Eating On The Wild Side (2013). Jo Robinson
2. Effects of cruciferous vegetables and their constituents on drug metabolizing enzymes involved in the bioactivation of DNA-reactive dietary carcinogens (2001). Mutation Research
3. Effects of some technological processes on glucosinolate content in cruciferous vegetables (2007). Food Chemistry
4. Processing (blanching, boiling, steaming) effects on the content of glucosinolates and antioxidant-related parameters in cauliflower (2009). Food Science and Technology