Knowing the best vitamin D foods for vegetarians and how to get enough vitamin D on a plant-based diet is important for bone health, a healthy immune system, and may help to protect against some cancers. If you live in northern latitudes, we can’t rely solely on vitamin D from the sun. This post will help breakdown the importance of vitamin D, which foods contain vitamin D and how we can supplement. 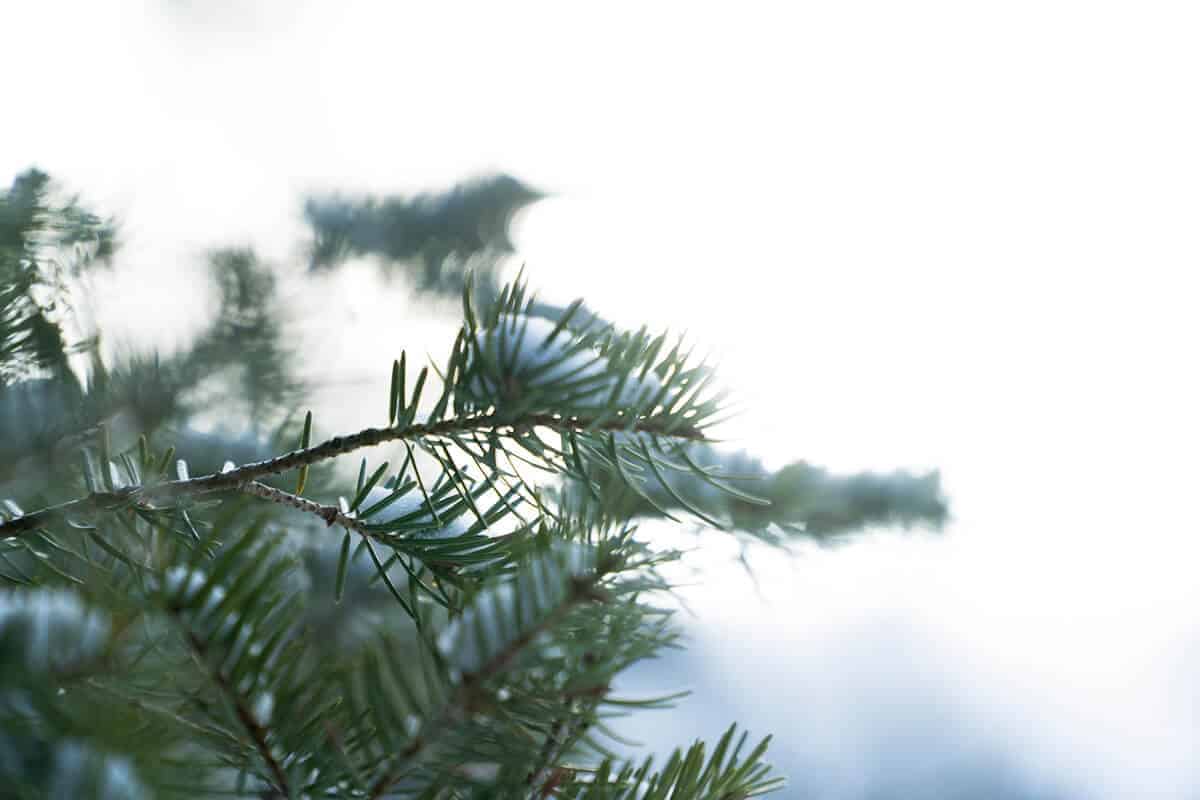 Northern winters can result in a lack of vitamin D.

By now, most of us have heard of the importance of Vitamin D. Vitamin D plays an important role in the absorption of calcium (see post Getting Enough Calcium On A Dairy-Free Diet), and has the ability to decrease inflammation in the body (1). Vitamin D comes primarily from the sun, but in northern latitudes (37 degrees north) during the winter months, we just can’t get enough (2).

While there are some food sources of vitamin D, in the winter we actually can’t get enough vitamin D from food alone. The best food source of Vitamin D is oily fish, and while vitamin D foods for vegetarians can be limited there are some steps we can take to ensure we are getting enough.


What Is Vitamin D For?

One of the most well-recognized roles of vitamin D is its role in bone health and its ability to increase the absorption of calcium in our bodies. Vegetarian and vegan sources of calcium can be plentiful in a well-balanced diet containing a wide variety of foods – see my post 10 Surprisingly Non-Dairy Sources of Calcium. Vitamin D also has the ability to modulate the immune system and oppose inflammation in the body (1). 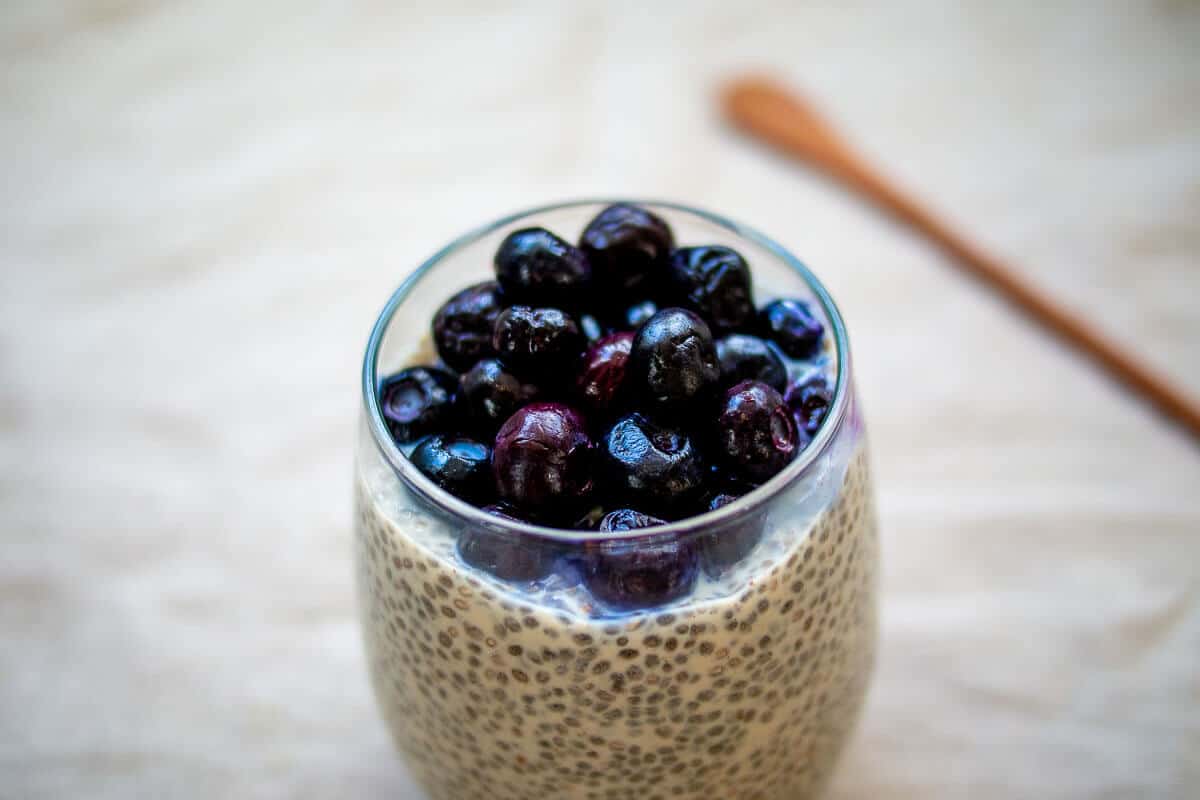 It is near impossible for most people to get enough vitamin D from food, not just vegans and vegetarians. While we can usually rely on sunshine for vitamin D, in northern latitudes from October to April the lack of sun exposure means our bodies are not able to convert the UVB from the sun to vitamin D3.

Severe vitamin D deficiency leads to rickets, a disease in children resulting in skeletal deformities due to the failure of bone tissue to properly mineralize (3).

In adults, vitamin D deficiency results in the inability to absorb calcium from food, and subsequent ‘stealing of calcium from bones’. This causes osteomalacia (softening of the bones caused by impaired bone metabolism), as well as an increased risk of osteoporosis and fractures.

Who Is At Risk of Vitamin D Deficiency

The risk of deficiency is not limited to those living in northern latitudes or to those following a plant-based diet. Other populations at risk include:

Except during the summer months, the skin makes little if any vitamin D from the sun at latitudes above 37 degrees north (in the United States, the shaded region in the map) or below 37 degrees south of the equator. People who live in these areas are at a higher risk of vitamin D deficiency (2). 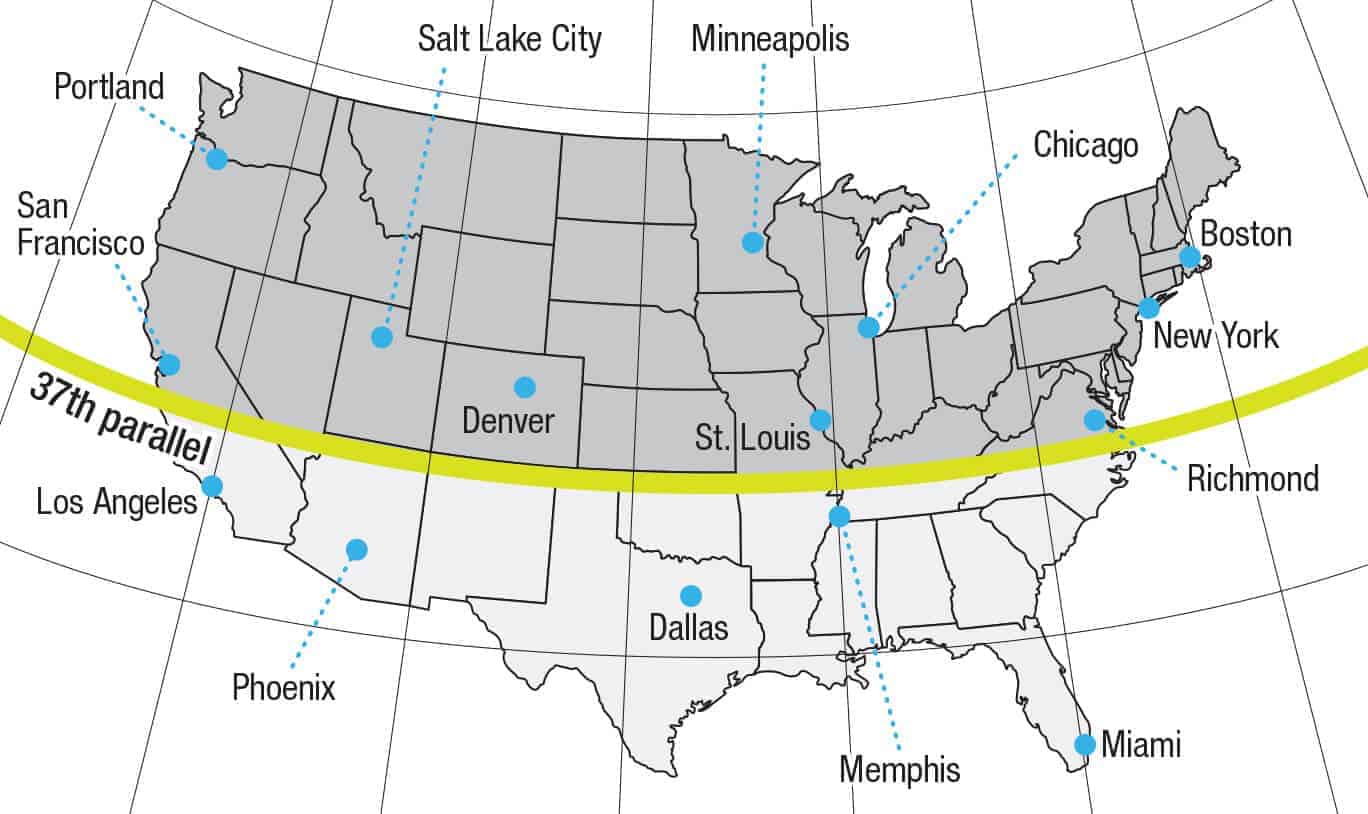 Vitamin D Receptors (VDR) are located in tissue all throughout the body, and in all the major organs. Vitamin D is active interacts with over 3,000 genes, including some associated with cancers, autoimmune disease, and infection!

A study published in 2001 and followed 12, 055 participates for 30 years found that when children were supplemented with vitamin D for the first year and a half of life they had a significantly lower risk of developing autoimmune type 1 diabetes (4).

Another study, published in 2004, found that a higher intake of vitamin D was associated with a lower risk of rheumatoid arthritis, another autoimmune condition (5).

In terms of the gold-standard of research, a randomized-controlled trial (RTC) tested the effect of vitamin D supplements on cancer. Women who took a higher dose of vitamin D (1,100 IU) combined with calcium, reduced their risk of developing non-skin cancers by 77% (6).

The only other RTC on Vitamin D and cancer found no effect on vitamin D intake and colorectal cancer – though, this study only supplemented with 400IU of vitamin D (7). 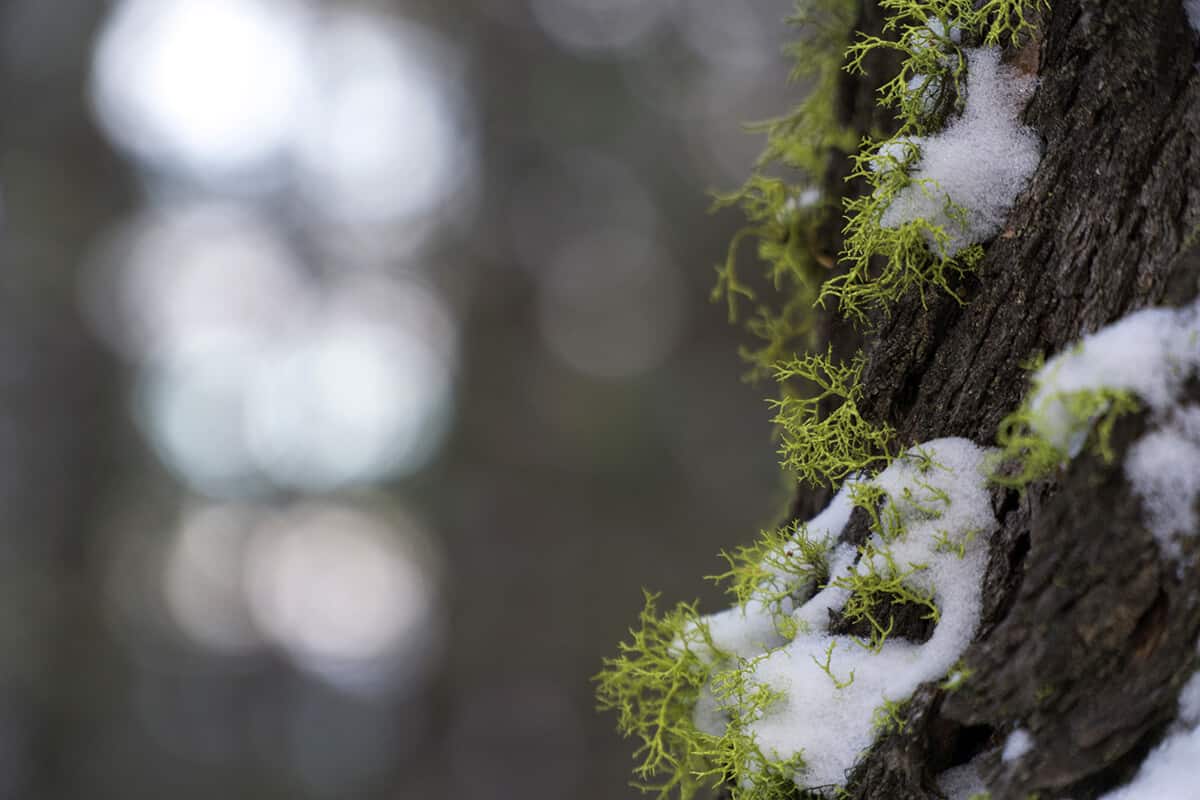 How Much Vitamin D Do We Need

The Institute for Medicine has set the RDA for vitamin D at 600 IU per day for those aged 9 to 70 (over the age of 70 the RDA is 800 IU per day), however, this amount is widely thought to be inefficient. 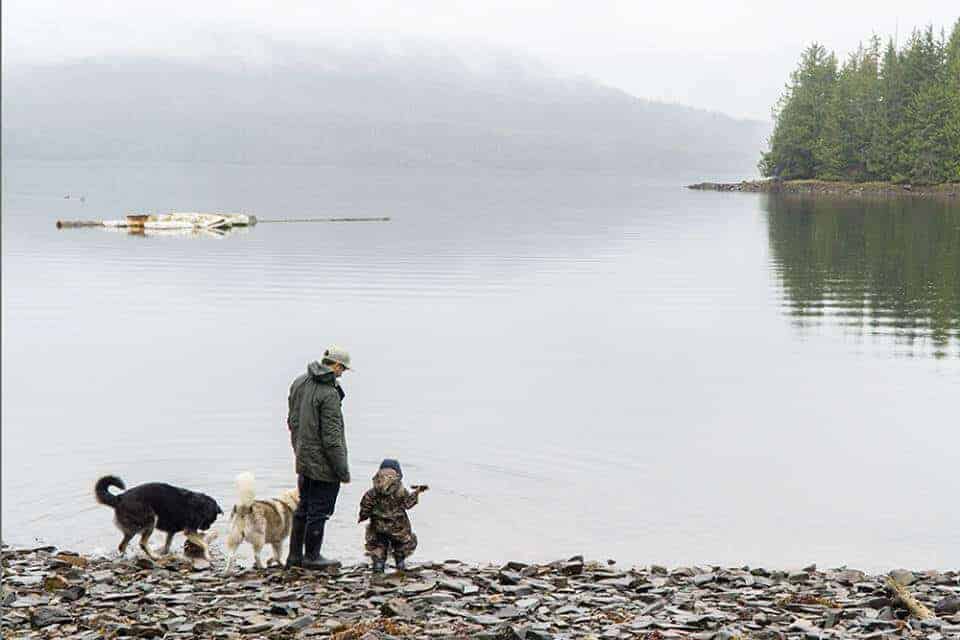 How To Know If You Are Getting Enough

The best way of knowing if you are getting enough vitamin D is to request a simple lab test at your next doctors’ visit. The test that can reliably assess your vitamin D levels is called a 25(OH)D test (not the 1,25(OH)₂D test which provides no information about vitamin D status).

This lab test comes with a small fee but is especially helpful for those at a higher risk of vitamin D deficiency (pregnancy, vegetarians/vegans, darker skin, ethnic minority, elderly, those living in northern latitudes).

The goal should be to maintain both children and adults at a level of more than 75nmol/L (30 ng/ml) to take full advantage of all the health benefits that vitamin D provides. This value meets the needs of 97.5% of the population. 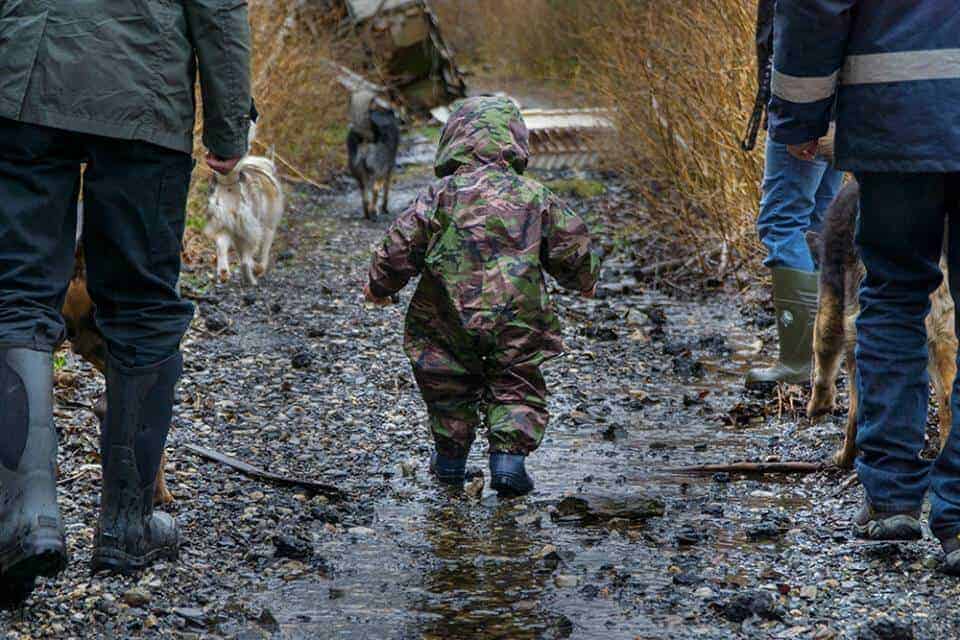 Northern BC lacks sunlight for much of the year

It is estimated that 90% of our vitamin D comes naturally through sun exposure. According to the National Institute of Health (NIH), 5 to 30 minutes of sun exposure between 10 am and 3 pm twice a week to the face, arms, legs, or back, without sunscreen is usually enough to get adequate vitamin D during certain months.

Oily fish such as salmon is our main food source of vitamin D, but we can’t rely on it as our only source – it is just not sustainable (see post Is There Something Fishy About Fish Farms?)! A 6 oz serving of salmon provides 900IU of vitamin D. Eggs contain some vitamin D, as well as fortified dairy and non-dairy milk alternatives.

Many vegan resources cite mushrooms as a good source of vitamin D2, with 1 cup of portobello mushrooms said to contain up to 600 IU.

While it is well recognized that exposing mushrooms to UV light can cause measurable increases in the vitamin D2 content, the amount of vitamin D2 will vary greatly depending on the type of light and duration of exposure, and can, therefore, be unreliable. For these reasons, we do not include mushrooms as a reliable vitamin D food for vegetarians and vegans. 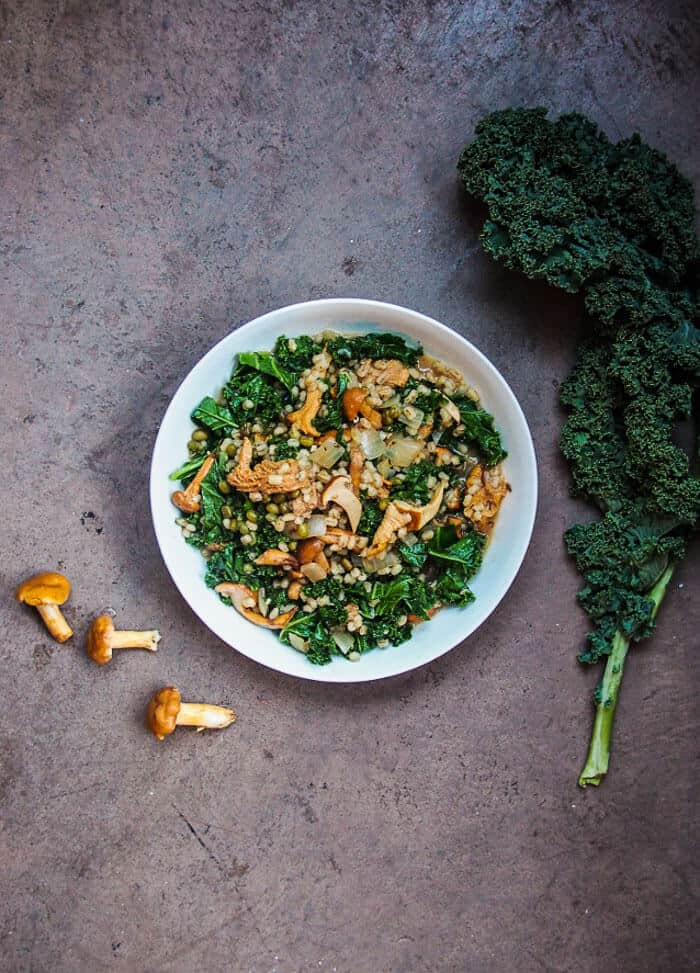 Vitamin D3 is more effective at raising and maintaining vitamin D levels in the body and is chemically identical to the form of vitamin D that our body produces from sun exposure (10,11). D2 is thought to be only about 60% as effective as vitamin D3 at raising serum vitamin D levels, therefore vegans who choose to supplement with D2 may need to increase intake accordingly (8).

When To Take Vitamin D Supplement

Vitamin D is a fat-soluble vitamin and is, therefore, best taken with a meal or snack that contains some fat. Really, the best time to take any supplement is when you are going to remember it. If morning is your most routine, take your vitamin D supplement with your High Protein Steel-Cut Oats with Peanut Butter this Berry Cauliflower and Greens Smoothie Bowl.

Most vitamin D3 supplements can be derived from an animal source such as sheep’s wool (lanolin), though if you are a vegetarian/vegan who is OK with wearing wool, this would be an acceptable choice.

Lichen is a vegan-friendly source of vitamin D2, though as it is less effective additional supplementation may be needed. A vegan vitamin D3 sourced from a type of wild-harvested lichen which has the ability to produce vitamin D in the natural D3 form is newly available from Whole Earth and Sea, and Nordic Naturals.

Tips For Vitamin D In Vegans and Vegetarians

What Some More Help Vitamin D Foods For Vegetarians and Vegans?

Check out my complete one-week vegan meal plan that includes all the necessary information for maximizing a plant-based diet over 70 pages and 30 vegan recipes. 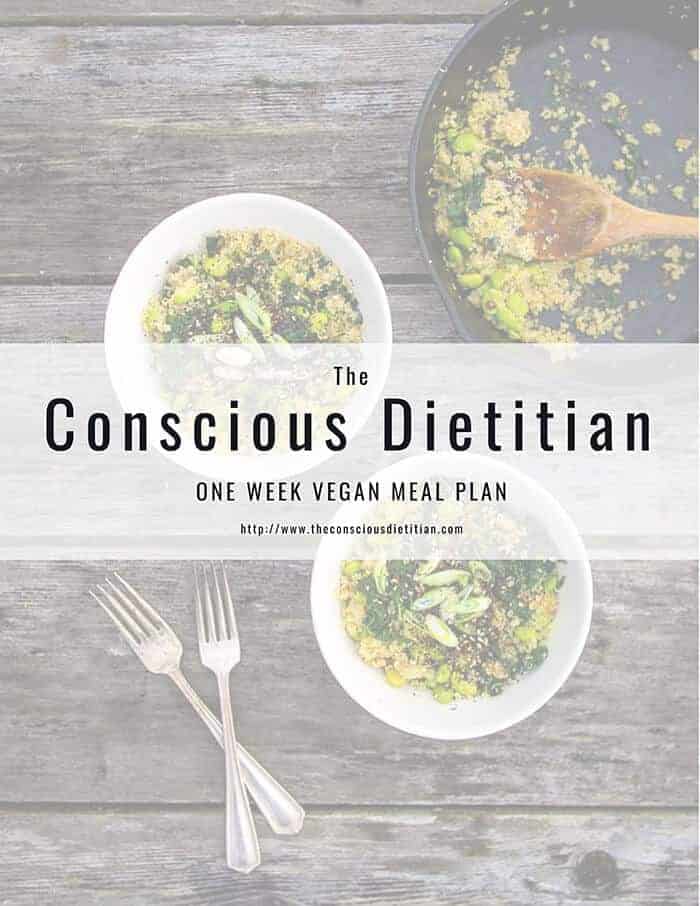